At academic event, UN officials spotlight data and technology as key to sustainability

The importance of quality data and cutting edge information communication technologies (ICTs) is increasingly critical to the shaping of the future sustainable development agenda, the head of the United Nations Development Programme (UNDP) confirmed today.

“There have been many calls for a 'data revolution' to go hand in hand with the new agenda. Progress needs to be measured. Data for that must be available, be of good quality, and be easily accessed,” UNDP Administrator Helen Clark declared in remarks delivered at the opening ceremony of the Skills and Technology Accelerating Rapid Transformation (START) Technology for Sustainable Development Programme earlier this morning in New York.

The event – coordinated in tandem with Amrita University and the UN Academic Impact– is bringing together experts from major international universities and institutes to address the importance of technology and build linkages between researchers, particularly as the UN and the global community barrels towards this year's Millennium Development Goals (MDGs) deadline.

In September, Member States will adopt a set of sustainable development goals that build on the eight MDGs, which wrap up at the end of this year. The UN is working with governments, civil society and other partners to build on the momentum generated by the MDGs and carry on with an ambitious post-2015 sustainability agenda aimed at eradicating poverty and addressing climate change.

In delivering the closing remarks to the event, the UN Special Adviser for Myanmar, Vijay Nambiar, similarly declared that technology “can and must serve the needs of the poorest of the poor.”

The importance of technology and data in boosting the acceleration of the MDGs has long been highlighted by the UN, which has also noted the growing reach of information and communications technology (ICT) in the developing world.

According to the Organization's data, in fact, six out of every seven people on earth have a mobile phone. Meanwhile, in Africa, mobile broad-band penetration jumped from 2 percent in 2010 to 20 percent in 2014. The result, the UN has added, is that for every 10 per cent increase in broadband penetration in the developing world, gross domestic product (GDP) goes up by almost two percent on average.

“The connections we make – between scholarship and society, between technology and the troubled, between science and citizenry – are all in the best spirit of the United Nations and its mission to bring people together in harmony and peace,” Mr. Nambiar continued, adding that achievements must be obtained by “using our inherent skills together with the immense bounty of technology, so that the transformations we seek become both rapid and accelerated.”

“That is the mission of START,” he concluded. 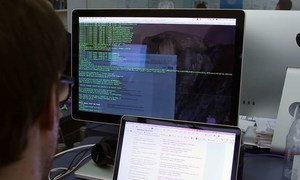