In a statement issued earlier today, Pierre Krähenbühl, the Commissioner General of the UN Relief and Works Agency for Palestine Refugees (UNRWA), voiced concern that the “despair, destitution and denial of dignity” resulting from the 2014 war with Israel and from the ongoing blockade remain “a fact of life for ordinary people in Gaza,” adding to the mounting humanitarian burden with which they are faced.

“The physical and psychological scars are everywhere to be seen in the Gaza Strip. Countless children live with the traumas endured during the war and over a thousand live with what will be life-long disabilities,” Mr. Krähenbühl declared. “This should be a reminder that conflicts are first and foremost measured by the human cost that they inflict.”

Last summer's 51-day conflict killed 1,462 civilians, including 551 children, and injured many thousands across the Gaza Strip. Six Israeli civilians, including one child, were also victims of the hostilities, which caused close to $1.4 billion in direct and indirect damages and $1.7 billion in economic losses to the Palestinian territory, according to the UN.

At the same time, Gaza today is home of the highest unemployment in the world, with more than 60 per cent of young people not working. Moreover, food insecurity affects 73 per cent of the population. An estimated 80 per cent of the population relies on humanitarian aid, mainly food assistance. Electricity is available only eight to 12 hours a day, also affecting water supply which covers a fraction of daily needs. Up to 90 million litres of partially-treated sewage are being discharged into the Mediterranean Sea every day due to electricity and fuel shortages. Finally, maternal mortality rates are estimated to have nearly doubled in the last 12 months.

The hostilities also wrought widespread structural devastation across the Strip. Some 100,000 people remain internally displaced as a result, hosted in temporary accommodation or in make-shift shelters. Close to a 120,000 people are still waiting to be reconnected to the city water supply. Work has yet to begin on a number of key health facilities.

Mr. Krähenbühl lamented the halting reconstruction of Gaza's homes noting that 315 days on from the ceasefire, “not a single totally destroyed house, of which there are over twelve thousand, has been rebuilt.”

“Resolute political action is required on a number of fronts to achieve the necessary change of paradigm in the Strip, starting with a lifting of the blockade, ensuring rights and security for all, allowing increased exports from Gaza to stimulate economic recovery and freedom of movement for civilians,” he continued. “While some steps have been taken in recent weeks, they fall far short of what is needed to bring about fundamental change in the lives of the population.”

Despite the Strip's “dire circumstances,” the UN official added, UNRWA's efforts to assist families were continuing unabated, with the first relief packages aimed at helping refugee families to rebuild their homes slate to arrive this week.

“While the numbers are small, and it comes very late, this development could be significant if sufficient quantities and the desperately needed funding can be obtained,” concluded Mr. Krähenbühl. “In an increasingly unstable Middle-East, neglecting the needs and rights of the people of Gaza is a risk the world should not be taking.” 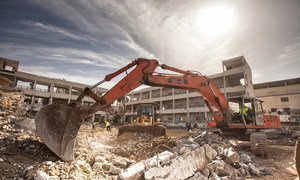