UNDP
A rubble removal project at Shujaiyah, Gaza, is funded by Sweden and implemented by UNDP.
7 July 2015

The 51-day conflict killed 1,462 civilians, including 551 children, and injured many thousands across Gaza. Six Israeli civilians (including one child) were also victims of the hostilities. It caused close to $1.4 billion in direct and indirect damages and $1.7 billion in economic losses to Gaza, points out a press release from the UN Office for the Coordination of Humanitarian Affairs (OCHA) .

Since then, continued Mr. Pipet, humanitarian organizations have supported close to 90,000 families with temporary shelter, food assistance has been provided to over 1.4 million people and some 85,000 children have received psychosocial support. Considerable work has already taken place to remove rubble and unexploded ordnance.

At the Cairo Gaza Reconstruction Conference last October, donors pledged some $3.5 billion in support of recovery efforts. A dedicated mechanism was created by Palestine, Israel and the UN to facilitate the entry of construction material. Within the last month, a new stage of reconstruction has begun, which will allow for the 12,600 totally destroyed homes to be rebuilt and new housing to be built.

Despite all these continuing efforts, he said that today, some 100,000 people remain internally displaced, hosted in temporary accommodation or in make-shift shelters. Close to a 120,000 people are still waiting to be reconnected to the city water supply. Work has yet to begin on a number of key health facilities. The humanitarian appeal for Gaza remains 70 per cent underfunded, while the UN Relief and Works Agency for Palestine Refugees in the Near East (UNRWA) is facing an unprecedented funding crisis in its General Fund.

“Our ability to move from short-term relief to longer-term reconstruction is constrained by a major shortfall in humanitarian funding. Nine months after the Cairo Reconstruction Conference, Gaza's recovery process needs to be accelerated,” warned Mr. Piper.

In order to accelerate the recovery process, the Humanitarian Country Team calls on international donors to ensure that commitments made in Cairo quickly translate into concrete funding on the ground, as only 28 per cent of pledges have been disbursed to date.

In addition, it calls on Israel to review its list of 'dual use' items for which entry into Gaza is restricted, particularly those items required for urgent medical care. Israeli and Palestinian authorities need to cooperate in addressing Gaza's acute water and energy crisis. The team also appeals to the Palestinian government to strengthen the management and oversight of the reconstruction process and to Israel to allow for a significant increase in the movement of people and construction material in and out of Gaza.

According to the World Bank, Gaza currently has the highest unemployment rate in the world, at 43 per cent. Food insecurity affects 73 per cent of the population. An estimated 80 per cent of the population relies on humanitarian aid, mainly food assistance. Electricity is available only eight to 12 hours a day, also affecting water supply which covers a fraction of daily needs. Up to 90 million liters of partially-treated sewage are being discharged into the Mediterranean Sea every day, partially due to electricity and fuel shortages. Finally, maternal mortality rates are estimated to have nearly doubled in the last 12 months.

“Simply restoring households to pre-war levels of vulnerability is not enough,” stated Mr. Piper. “Palestinians in Gaza need to be lifted out of this self-perpetuating cycle of crisis.” 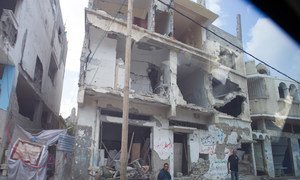 Palestinian refugee families living in substandard dwellings and owners of homes demolished in last year’s hostilities in Gaza, are among those gaining access to shelter under a United Nations-backed project to provide close to 450 newly-built housing units, which was stalled for three years due the lack of access to construction materials.