UNICEF/IMG_9423/Yasin
A child gets vaccinated for polio at Al-Olufi Health Center in downtown Sanaa.
7 July 2015

The United Nations human rights office is among several key UN entities voicing deep concern over the worsening human rights and humanitarian situation in Yemen that has more than 1,500 civilians dead, 3,600 injured and 1 million displaced in three months of violence.

Underscoring that civilians continued to bear the brunt of the conflict, Cécile Pouilly, spokesperson for the Office of the UN High Commissioner for Human Rights (OHCHR) updated the press in Geneva that between 17 June and 3 July, at least 92 civilians – including 18 women and 18 children – were killed with another 179 injured – including 43 women and 30 children. Since the conflict began, more than 1 million civilians had been internally displaced or sought refuge in neighbouring countries.

“Since 17 June, coalition forces have continued aerial bombardment and other attacks. Ground clashes, shelling, sniper fire and detonation of improvised explosive devices have also been reported in different governorates in Yemen,” she said.

Over the past few weeks, OHCHR documented rights violations and abuses and violations of international humanitarian law by all parties to the conflict, including violations of the right to life, abduction, ill-treatment and attacks against humanitarian workers, journalists and media organizations.

“Dozens of civilians have been abducted and subjected to arbitrary detention in Sana'a. We have also received worrying reports that local Popular Resistance committees affiliated with exiled President Abd Rabbo Mansour Hadi have summarily executed at least six people perceived to be loyal to the Houthi-Saleh coalition and committed acts of ill-treatment.”

Additionally, OHCHR has been closely monitoring attacks by the conflict parties against UN offices, citing an airstrike on 28 June that wounded one civilian and partially destroyed the UN Development Programme (UNDP) office in Khormaksar, Aden. The International Organization for Migration (IOM) was struck twice, once by a mortar in Basateen and again by an airstrike in Harad.

The UN rights office is also acutely worried about increasing attacks against places of worship, pointing to the targeting of five Zaydi mosques with car bombs over the past few weeks as an alarming trend to create sectarian divisions.

“Since 17 June, there has been further destruction of civilian infrastructure, with at least 36 buildings, including hospitals, schools, court houses, power generation facilities and communications institutions partially or totally damaged in the governorates of Sana'a, Aden, Taiz, Al-Jawf, Al-Mahwit, and Hajjah,” said Ms. Pouilly said.

Humanitarian access also remains severely constrained by the recent violence. Since the beginning of the conflict, land, air and maritime restrictions have severely reduced imports – with food and other essentials dropping significantly.

In addition to insecurity on the roads and blocked access to food and clean water, civilians have been imposed with movement restrictions. Yemen's healthcare system continues to deteriorate as medicine shortages, essential medical supplies and fuel have reached critical levels.

In response to a question on attacks against United Nations offices, she called on all parties to respect the inviolability of UN premises, in accordance with applicable international law protecting UN facilities, including the Convention on the Safety of United Nations and associated personnel.

At the same time, Adrian Edwards, spokesperson for the Office of the UN High Commissioner for Refugees (UNHCR), said that on Saturday, 4 July, a rocket blasted a kindergarten in Aden, killing 12 refugees.

“Since the closure of schools across Yemen at the end of May, schools and kindergartens were used to accommodate internally displaced persons. Refugees and internally displaced families were among the most vulnerable, and the UNHCR thus again called on all parties to allow unfettered access for humanitarian aid,” he said.

Mr. Edwards added that there are some 250,000 refugees in Yemen, whereas more than 46,000 persons had fled the country. At the same time, some 35,000 had crossed into Yemen from the Horn of Africa by boat since the beginning of the year.

“Clearly, there is a massive humanitarian crisis…in Yemen,” said Jens Laerke, spokesperson for the UN Office for the Coordination of Humanitarian Affairs (OCHA), who said the UN's $1.6 billion dollar appeal is only partially funded. He explained however that no cash had been taken away from other operations because the Yemen relief appeal is underfunded.

Yemen gets UN loan to upgrade roads for at least 300,000 people 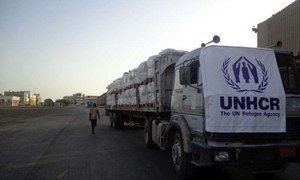 Yemen: despite major obstacles and insecurity, UN continuing to deliver aid to displaced

The United Nations is working to deliver humanitarian aid in war-torn Yemen despite widespread insecurity, port delays and severe restrictions on access, several of the Organization's agencies and partners confirmed today, citing efforts to provide everything from emergency shelters to food and other basic necessities to tens of thousands of people displaced by fighting and airstrikes.