Secretary-General Ban Ki-moon announced today that “a further inquiry or investigation would be necessary to finally establish the facts” of the death of the second Secretary-General of the United Nations, Dag Hammarskjöld, in a plane crash in Northern Rhodesia, now Zambia, along with 15 others more than 50 years ago.

A statement by Mr. Ban’s spokesperson said the three-member Independent Panel of Experts appointed by the Secretary-General found “new information relating to ‘crew fatigue’ which contributes to one or more of the hypothesis. Most importantly, the Panel found new information, which it assessed as having moderate probative value, sufficient to further pursue aerial attack or other interference as a hypothesis of the possible cause of the crash.”

Mr. Hammarskjöld served from April 1953 until his death in a plane crash in September 1961. At the age of 47 years, he is the youngest to have held the post and was awarded a posthumous Nobel Prize.

Mr. Ban has conveyed the report of the Independent Panel of Experts to the President of the General Assembly, along with his own observations on the progress made and on the way forward in the search for the truth about the death of the late Secretary-General and of the 15 members of the party accompanying him.

“The Panel has made significant progress in the search for the truth about the events of 17 and 18 September 1961,” said today’s statement.

The panel consisting of Mohamed Chande Othman of Tanzania, Kerryn Macaulay of Australia and Henrik Larsen of Denmark, examined and assessed the probative value of new information relating to the various hypotheses of the cause or causes of the crash, it added.

Based on its findings, the Secretary-General is of the view that “a further inquiry or investigation would be necessary to finally establish the facts. Such an inquiry or investigation would, however, be in a better position to reach a conclusive finding regarding the tragic events of 17 and18 September 1961 with the benefit of the specific information requested by the Panel from the Member States concerned.”

Mr. Ban “will pursue the pending requests for specific information made by the Panel to certain Member States, and urges all Member States to declassify or otherwise make available any information they may have in their possession related to the circumstances and conditions resulting in the deaths of Dag Hammarskjöld and the other members of the party accompanying him.”

He also recommends that the General Assembly “remain seized of the matter and that it reiterate its encouragement to Member States to provide any relevant records or information.”

Mr. Ban appointed UN Legal Counsel Miguel de Serpa Soares to engage with the Member States concerned to follow up on the unfulfilled aspects of the Panel’s request.

The panel’s report “constitutes an indispensable step towards fulfilling our shared responsibility to establish the facts after these many years,” according to the Secretary-General. “This is our solemn duty to the distinguished former Secretary-General, Mr. Dag Hammarskjöld, to the other members of the party accompanying him, and to their families.”

Mr. Ban will report to the General Assembly on any further progress made before the end of its 70th session, which opens in September 2015.

♦ Receive daily updates directly in your inbox - Subscribe here to a topic.
♦ Download the UN News app for your iOS or Android devices.
Dag Hammarskjöld

Guterres hails predecessor Dag Hammarskjöld as ‘my reference and my inspiration’ 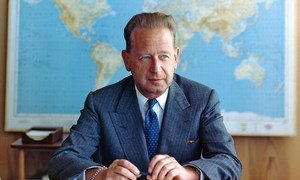 The United Nations today announced the members of the Independent Panel of Experts tasked with examining new information related to the tragic death of former Secretary-General Dag Hammarskjöld and his party in September 1961.