The capacity of the United Nations and its partners to meet humanitarian needs is under “unprecedented strain,” Secretary-General Ban Ki-moon warned today at a forum in Oslo, Norway, where he highlight the critical role civil society plays as part of the global effort to save lives, support livelihoods and protect people from violence.

“From the earthquakes in Nepal to avalanches in Afghanistan, from Ebola in West Africa to many other frontlines of conflict and disaster, civil society organizations are playing an ever growing role,” Mr. Ban underscored in his address to the forum, which focused on the role of civil society in humanitarian emergencies.

The Secretary-General highlighted the role of local organizations as a vital link between the government and global and grass roots associations, especially at a time when the UN and its partners are aiming to assist nearly 79 million people worldwide.

He pointed out that during a disaster, such organizations could be faster and more flexible than larger entities. Attuned to local context, culture, language and needs, civil society organizations provide bonds of solidarity and trust – with women’s groups playing a particularly valuable role in supporting a society’s economic and social fabric.

“Yet,” Mr. Ban remarked, “I am keenly aware that this service comes with great sacrifice. Last year, 88 per cent of all attacks against humanitarian workers were against local aid workers.”

He emphasized that the international community must do more to sustain the critical role of civil society. “As we create a more diverse, inclusive and truly global humanitarian system, we must use the strengths of all actors.”

In May 2016, the Secretary-General will convene the first-ever World Humanitarian Summit in Istanbul, Turkey, at which civil society organizations would be important stakeholders. 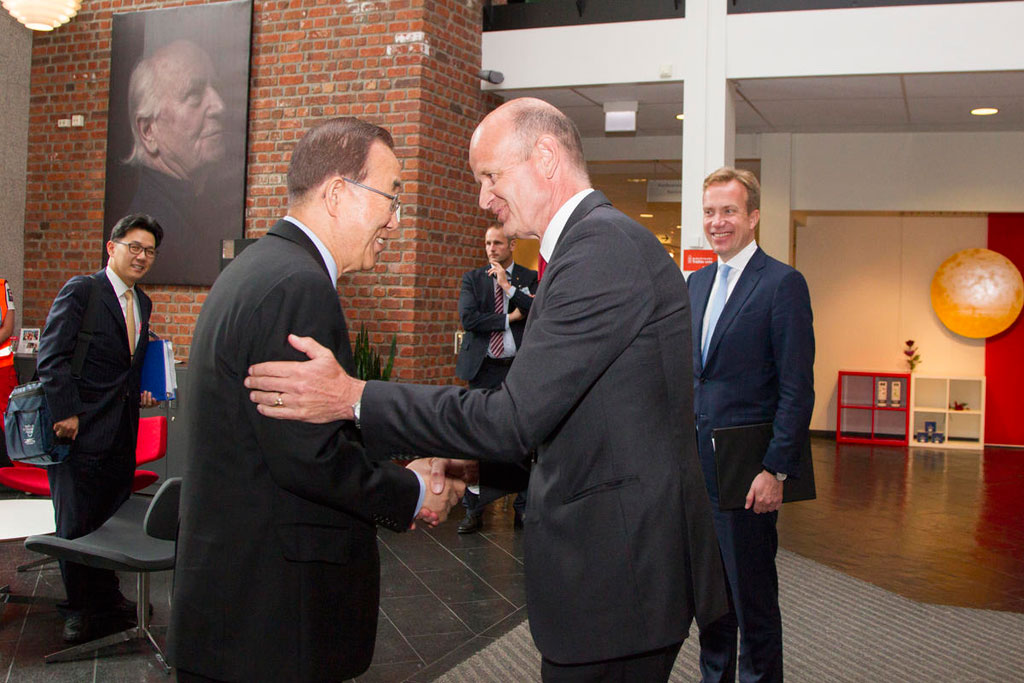 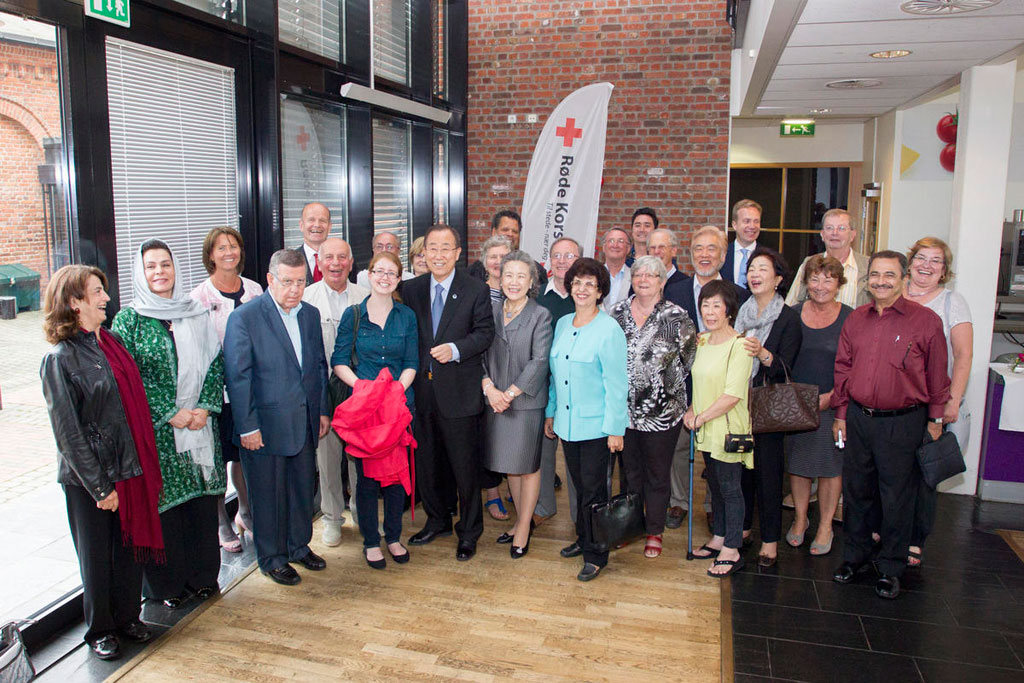 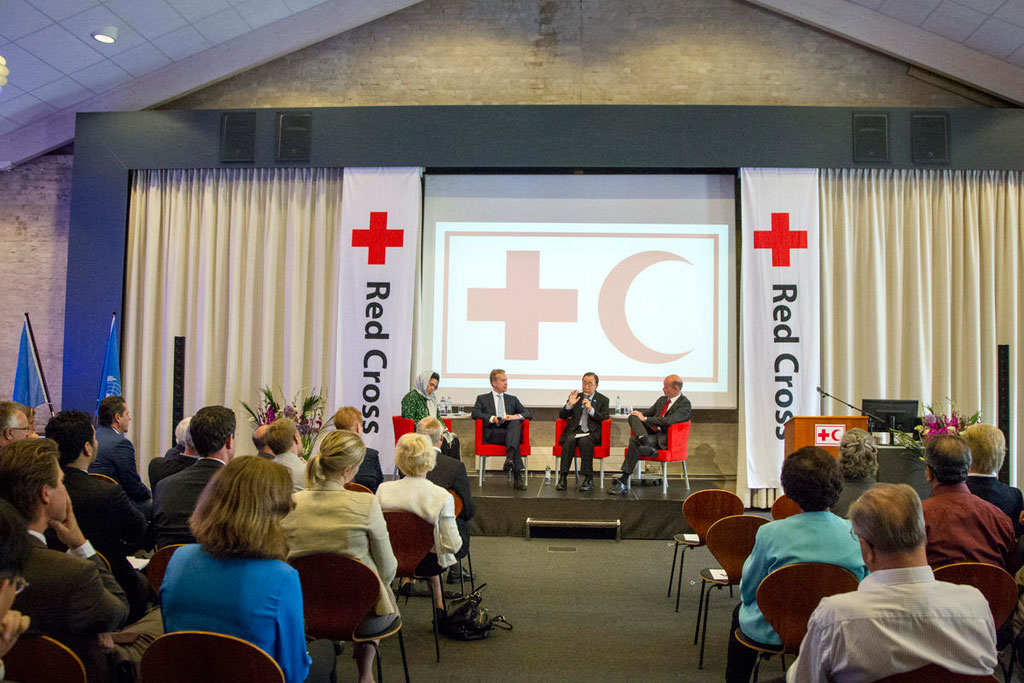 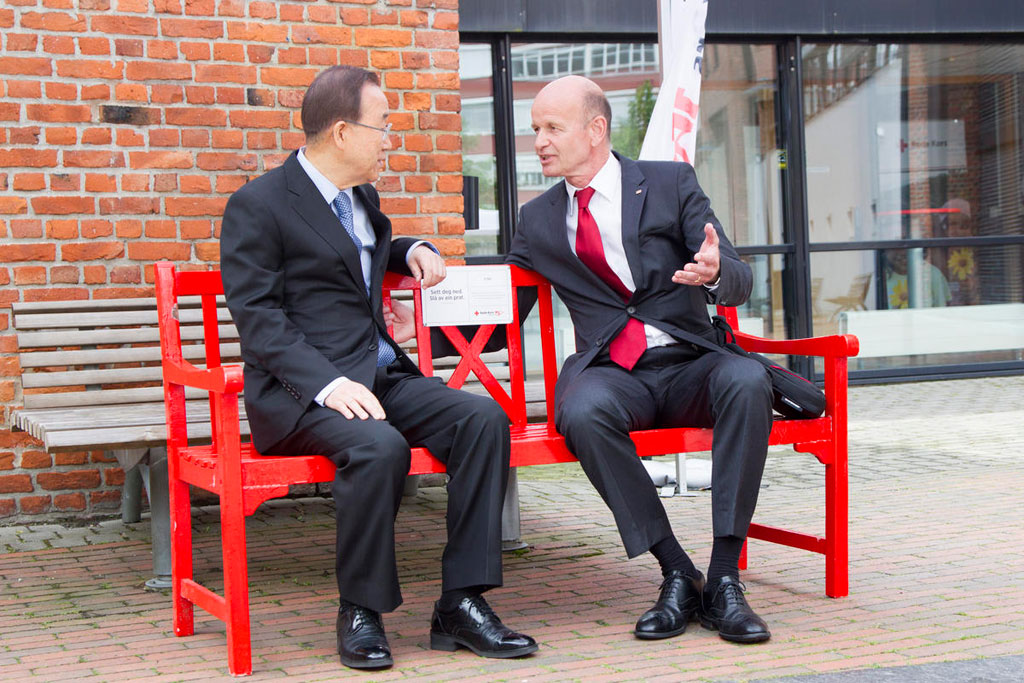 Secretary-General Ban Ki-moon gets a tour of the Norwegian Red Cross from Svein Mollekleiv, President, including explanation of the Red Bench Initiative to Promote Dialogue. UN Photo/Rick Bajornas 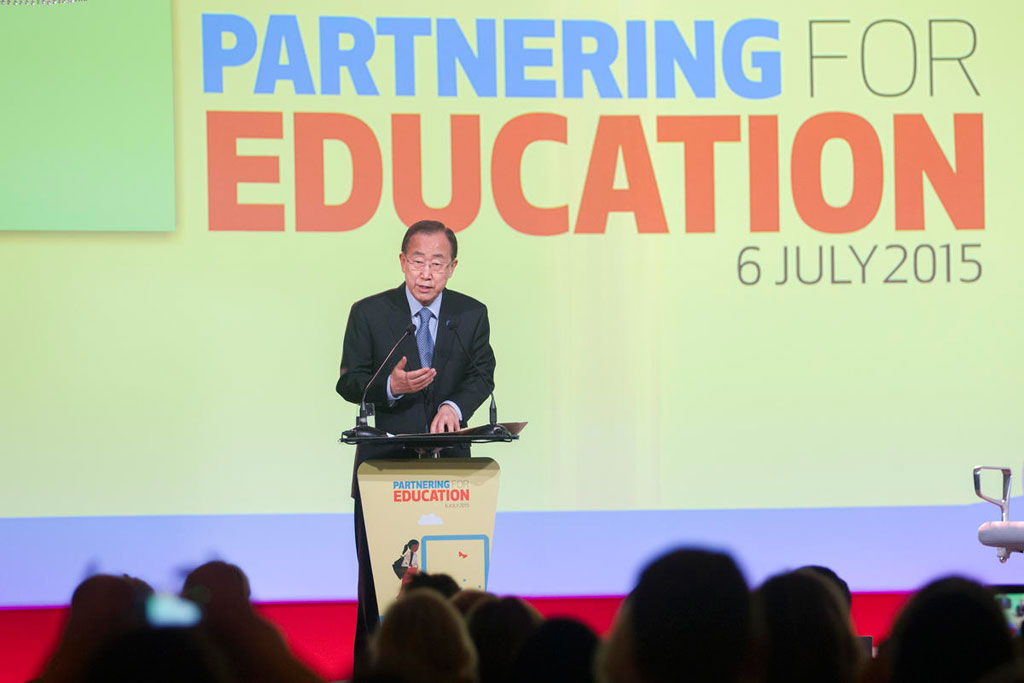 As part of the lead-up to the Summit, civil society organizations have helped to organize eight regional consultations, reaching out to nearly 15,000 people in 135 countries.

“The rise of global humanitarian action is one of humanity’s greatest moral achievements,” Mr. Ban said. “Today our goal is a world where every woman, man and child in need can receive some form of assistance and protection from the impacts of disaster, conflict, displacement, hunger or disease.

“This world is now within our grasp. Together we can make this vision a reality.”

“We need teachers and students. We need telecoms companies and civil society organizations. We need policy-makers and app developers. We need to stand strong,” he told the gathering.

“When we put every child in school, provide them with quality learning, and foster global citizenship, we will transform our future.

While in Oslo, Mr. Ban also met with the country’s Foreign Minister, Børge Brende, and thanked him for Norway’s strong and consistent support to the UN. He also briefed him on UN efforts to find a political solution in Syria and to achieve an end to the crisis in Yemen, including through a humanitarian pause.

In addition, the two leaders discussed the current state of the Middle East peace process, as well as the negotiations underway for next week’s Third International Conference on Financing for Development.

Humanitarian needs are at an all-time high, the top United Nations relief official declared today, stressing that while the Organization needs no less than $18.8 billion to meet the needs of nearly 80 million people, it has received only 26 per cent of that amount.