UNHCR
A rescued boat woman and her two children eat some welcome food at a centre in Kuala Cangkoi, Indonesia.
1 July 2015

Several senior United Nations officials today strongly urged Southeast Asian countries to back a “people-centred” approach to migration by, among others, expanding avenues for safe and legal migration, while stepping up law enforcement to put a stop to human trafficking.

Welcoming the convening of an emergency meeting to be held on 2 July by the Association of Southeast Asian Nations (ASEAN) to address a people-centred approach for tackling the irregular migration in the Bay of Bengal and the Andaman Sea, the officials called for a comprehensive and durable solution to this issue.

“The meeting provides a timely opportunity to move meaningfully forward on the comprehensive and durable solution … in keeping with the spirit of unity and solidarity of a people-oriented and people-centred ASEAN,” according to a joint statement issued today by the UN High Commissioners for Refugees and for Human Rights, the Director-General the International Organization for Migration (IOM), the UN Special Representative for International Migration and Development, and Executive Director of the UN office on Drugs and Crime (UNODC).

Despite recent progress, some important remaining tasks need to be done such as granting access to national and international agencies to reach refugees and migrants, rather than using immigration detention, noted the joint statement.

“We strongly urge States to undertake sustained efforts to expand avenues for safe and legal migration,” said the statement, adding that those include “for family reunification and labour migration at all skill levels, while stepping up law enforcement.”

The joint statement also called on States to implement UNODC's recommendation to network ports and border crossings for operations to share information and improve policies with commitments to the UN Convention against Transnational Organized Crime.

Stressing that the creation of a continuing mechanism is key to international support for the affected States, the UN officials said such task force should guarantee the rights of all migrants and refugees while addressing the drivers and root causes of the forced movement. 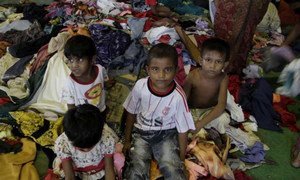 Several senior United Nations officials have today strongly urged the leaders of Indonesia, Malaysia, and Thailand, to protect migrants and refugees stranded on vessels in the Bay of Bengal and the Andaman Sea, to facilitate safe disembarkation, and to give priority to saving lives, protecting rights, and respecting human dignity.