Two United Nations agencies have unveiled a series of new guidelines aimed at addressing the health risks posed by the increasing number and intensity of climate change-related heatwaves affecting the planet, as warm weather alerts spread across Europe following soaring temperatures that killed hundreds of people in India and Pakistan last month.

The set of guidelines, jointly produced by the UN World Health Organization (WHO) and World Meteorological Organization (WMO) and entitled Heatwaves and Health: Guidance on Warning-System Development, will seek to alert decision-makers, health services and the general public through the systematic development of so-called heatwave early warning systems which, in turn, will hope to trigger timely action in reducing the effects of hot-weather extremes on health.

“Heatwaves are a dangerous natural hazard, and one that requires increased attention,” said Maxx Dilley, Director of the WMO's Climate Prediction and Adaptation Branch, and Maria Neira, Director of the WHO's Department of Public Health, Environmental and Social Determinants of Health, in their foreword to the publication. “They lack the spectacular and sudden violence of other hazards, such as tropical cyclones or flash floods, but the consequences can be severe.”

According to the two agencies, heatwaves are becoming more frequent and intense on a global scale, largely due to the acceleration of climate change. In recent weeks, they have already caused hundreds of deaths across India and Pakistan. Meanwhile, the heatwaves in the northern hemisphere's summer of 2003 were responsible for the deaths of tens of thousands of people across the European continent.

The publication's launch also follows the WMO's recent revelation that 14 of the 15 hottest years recorded have all been in the 21st century, confirming a dangerous trend in global warming amid devastating weather patterns and increasing temperatures.

The guidance provided by the WHO and WMO takes into consideration a number of factors, including who is most at risk from heat, outlines approaches to assessing heat stress and surveys heat-intervention strategies, all the while building upon the “lessons learned” from the implementation of the first-ever Heat-Health Warning System, rolled out in the United States city of Philadelphia in 1995.

In addition, the authors noted, the WMO-WHO joint publication is expected “to provide effective climate services and save lives in vulnerable communities around the world.”

“Growing concerns over climate change have brought to the fore three important aspects: adaptation, disaster-risk reduction and the need for climate information and services to support these,” Mr. Dilley and Dr. Neira concluded. “Heat-Health Warning Systems bring together these three facets and exemplify an effective demonstration of climate-risk management in practice.” 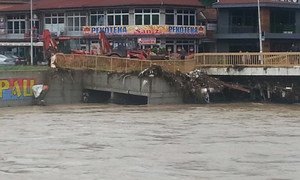 Devastating weather patterns and increasing temperatures will last into the foreseeable future as global warming is expected to continue, the United Nations World Meteorological Organization (WMO) confirmed today as it explained that 2014's ranking as the “hottest year on record” is part of a larger climate trend.