Afghan refugees leave their dinghy and wade ashore in Mytilini, on the Greek island of Lesvos. UNHCR/Jowan Akkash
1 July 2015

The opening lines of the The sea route to Europe: The Mediterranean passage in the age of refugees, compiled by the Office of the UN High Commissioner for Refugees, put the challenges facing Europe, the wider international community and humanitarian actors in stark relief.

“Europe is living through a maritime refugee crisis of historic proportions. Its evolving response has become one of the continent's defining challenges of the early 21st century, with long-lasting implications for humanitarian practice, regional stability and international public opinion,” it says, also revealing that the first half of the year saw an increase of 83 per cent of such crossings compared to the same period last year.

“As Europe debates the best way to deal with the rising crisis on the Mediterranean, we must be clear: most of the people arriving by sea in Europe are refugees, seeking protection from war and persecution,” said UN High Commissioner for Refugees António Guterres in a press release on the launch of the report.

One third of the men, women and children who arrived by sea in Italy or Greece were from Syria, whose nationals are almost universally deemed to qualify for refugee status or other forms of protection, the report explains. The second and third most common countries of origin are Afghanistan and Eritrea, whose nationals are also mostly considered to qualify for refugee status.

“Data received from Greece, Italy, Malta and Spain charts an 83 per cent increase in refugees and migrants crossing the Mediterranean from January to June compared to the same period last year. Historically, crossings significantly increase in the second half of the year, in particular over the summer months, so it is expected the numbers will continue to soar. Arrivals in the second half of 2014, for example, were almost double those of the first half,” warns Mr. Gutteres.

The number of deaths at sea rose to record levels in April 2015, and then dropped dramatically in May and June. Between January and March, 479 refugees and migrants drowned or went missing, as opposed to 15 during the first three months of the year before. In April the situation took an even more terrible turn. In a number of concurrent wrecks, an unprecedented 1,308 refugees and migrants drowned or went missing in a single month, the report emphasizes.

“The decline in people drowning over the past two months [May and June] is encouraging; a sign that with the right policy, backed by an effective operational response, it is possible to save more lives at sea,” acknowledged Mr. Guterres.

“Nonetheless, we must stay vigilant. For the thousands of refugees and migrants who continue to cross the Mediterranean every week, the risks remain very real.” The report shows that the eastern Mediterranean route from Turkey into Greece has now surpassed the central Mediterranean route (from North Africa to Italy) as the main source of maritime arrivals.

“Europe has a clear responsibility to help those seeking protection from war and persecution,” said Guterres. “To deny that responsibility is to threaten the very building blocks of the humanitarian system Europe worked so hard to build. European countries must shoulder their fair share in responding to the refugee crisis, at home and abroad”, said Mr. Gutteres. 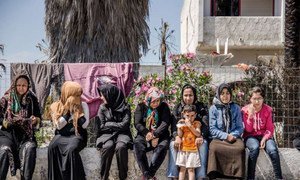 The United Nations today welcomed a decision by European Union (EU) leaders to assist up to sixty thousand refugees in need of international protection but warned that much more will have to be done to address the root causes of a steadily increasing global refugee crisis.