OCHA/Josephine Guerrero
A meal being prepared at the Al-Riad shelter, Aleppo, Syria.
30 June 2015

The international community should be ashamed that three years since the adoption of the Geneva Communiqué on Syria, the Middle Eastern country’s “cataclysmic conflict” continues unabated, United Nations Secretary-General Ban Ki-moon said today.

In a statement released by his spokesperson’s office this afternoon, the Secretary-General lamented the lack of movement by global actors towards resolving the four year-long civil war in which more than 200,000 Syrians have been killed and millions more displaced.

“The suffering of the Syrian people continues to plumb new depths,” Mr. Ban declared. “Civilians face a barrage of barrel bombs and other horrendous violations of human rights such as torture and prolonged detention of tens of thousands. There must be no impunity for such inhumanity.”

To that point, the UN chief warned that the growing “patchwork” of Syrian and non-State actors had placed the country’s millenary history “under assault” and opened a wound in the volatile Middle East.

“Syria is on the brink of falling apart,” he added, “putting at even further risk what is already the most unstable region in the world.”

The humanitarian impact of the crisis is only further compounded by the grim human toll which, as of today, counts 220,000 people killed and over one million injured since hostilities began.

“The international community, and in particular the Security Council, cannot afford to waste any further time in ending the cycle of violence,” Mr. Ban continued. “The human cost of further delay should be unacceptable to all – strategically, politically, and morally.”

“I appeal in the strongest possible terms to the international community to join together with my Special Envoy to genuinely work for the implementation of the Geneva Communiqué before further irreparable damage is done to Syria, its people and the region,” he added.

The Secretary-General’s Special Envoy, Staffan de Mistura, is currently engaging in a series of consultations with the parties to the conflict in this country and within the framework of the Geneva consultations. Most recently, he met with leaders of the Syrian tribes and discussed perspectives for a political solution to the Syrian conflict.

The Geneva Communiqué was adopted after the first international meeting on the issue on 30 June 2012, and since endorsed by the UN Security Council.

The document lays out key steps in a process to end the violence. Among others, it calls for the establishment of a transitional governing body, with full executive powers and made up by members of the present Government and the opposition and other groups, as part of agreed principles and guidelines for a Syrian-led political transition. 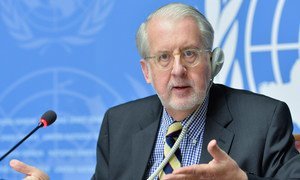 Syria’s “ever-accelerating” cycle of violence continues to reap civilian casualties and provoke “unspeakable suffering”, the head of a United Nations-mandated Commission of Inquiry warned today, as he lamented the international community’s inability to bring the country’s four-year war to a close.