UNHCR/R. Riek
South Sudanese refugees wait to be registered at a crossing into Ethiopia earlier in 2015.
30 June 2015

The South Sudanese armed forces may have committed widespread human rights abuses, including the alleged raping and immolation of women and girls, during the recent upsurge in fighting across the African State, according to a new report released by the United Nations mission in the country (UNMISS).

The report – released today by UNMISS – suggests that the Sudan People's Liberation Army (SPLA) and associated armed groups carried out a campaign of violence against the population of South Sudan's Unity state, reportedly killing civilians, looting and destroying villages and displacing over 100,000 people.

According to the testimony of 115 victims and eyewitnesses from the Unity state counties of Rubkona, Guit, Koch, Leer and Mayom, SPLA fighters also abducted and sexually abused numerous women and girls, some of whom were reportedly burnt alive in their dwellings.

“This recent upsurge [in fighting] has not only been marked by allegations of killing, rape, abduction, looting, arson and displacement, but by a new brutality and intensity,” says the UNMISS report. “The scope and level of cruelty that has characterized the reports suggests a depth of antipathy that exceeds political differences.”

“Revealing the truth of what happened offers the best hope for ensuring accountability for such terrible violence and ending the cycle of impunity that allows these abuses to continue,” the Secretary-General's Special Representative, Ellen Margrethe Løj, who also heads the UN Mission, said in a press release as she urged South Sudanese authorities to allow UN human rights investigators to access the sites of the alleged atrocities.

“We call on the SPLA to fulfil this commitment and allow our human rights officers unfettered access to the sites of these reported violations.”

UNMISS has confirmed that the Mission's human rights officers have been routinely denied access to locations of interest by the SPLA and have also encountered logistical obstacles. The South Sudanese authorities, on the other hand, have dismissed any allegations of wrongdoing and have reportedly welcomed the investigations.

South Sudan's ongoing conflict began in December 2013 and has been marked by brutal violence against civilians and deepening suffering across the country. Some 120,000 people are sheltered in UN compounds there while United Nations estimates that the number of people in need for 2015 will include an anticipated 1.95 million internally displaced persons and a projected 293,000 refugees. 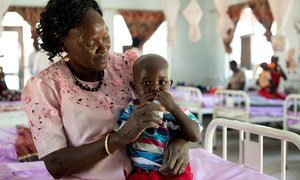 The head of the United Nations Children’s Fund (UNICEF) has appealed “in the name of humanity and common decency” for a halt to the worsening violence against children in South Sudan that has seen boys reportedly castrated and left to bleed to death and girls as young as eight who have been gang raped and murdered.