Expressing concern over the plight of millions of Afghan refugees, the United Nations High Commissioner for Refugees has called on the international community to boost its engagement, employ innovative solutions and pro-active joint advocacy to end the world’s largest prolonged humanitarian crisis.

"It is critical that the international community steps up to support the Afghan government in their efforts to create adequate conditions for Afghans to return home and restart their lives in safety and dignity," António Guterres said Friday at a press conference, wrapping up his three-day visit to the Pakistan.

The future of some 2.6 million Afghan refugees, with many having been living outside the country for over three decades, still hangs in the balance while fresh emergencies in the Middle East and Africa compete for global attention, warned Mr. Guterres.

Applauding Pakistan's goodwill and hospitality as a host country, he also noted that "the unwavering generosity of Pakistani people towards Afghan refugees has contributed to regional stability but also more broadly to the global refugee cause at a time when we witness increased asylum fatigue worldwide."

However, traditional approaches are no longer sufficient for solutions in 2015, given prevailing challenges in Afghanistan, said Mr. Guterres, adding that, “in an environment of shrinking humanitarian resources, it is vital to pursue innovative solutions and creative joint advocacy and resource mobilization."

In this regard, UN-backed pro-active joint resource mobilization, together with programmes stimulating voluntary repatriation and supporting sustainable reintegration of Afghan refugees, are among the preferred solutions.

As an important first step in these efforts, a joint mission to the Gulf Cooperation Council countries is planned in late August 2015.

Since 2002, over 3.8 million Afghan refugees have returned home from Pakistan, assisted through the largest voluntary repatriation programme in UNHCR's history.

Pakistan is currently hosting 1.5 million registered Afghan refugees – the largest protracted refugee population globally, of which 67 per cent live in urban and peri-urban areas, while 33 per cent remain in special refugee villages. 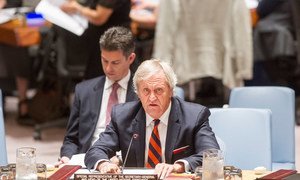 INTERVIEW: Afghanistan must not be forgotten amid more pressing crises, warns UN envoy

The international community must not take its “eye off the ball” when it comes to Afghanistan, the top United Nations envoy there has warned, noting that the country faces numerous challenges that will take quite a bit of time to tackle.