29 June 2015
The Security Council today extended the United Nations Multidimensional Integrated Stabilization Mission in Mali (MINUSMA) for one year, within the authorized troop ceiling of 11,240 military personnel, including, for the first time, at least 40 military observers to monitor and supervise the country’s newly agreed ceasefire.

Through a unanimously adopted resolution, the 15-member body extended MINUSMA’s mandate until 30 June 2016, and decided that it should perform tasks related to, among others, the monitoring and supervision of ceasefire arrangements; supporting the implementation of the Agreement on Peace and Reconciliation in Mali; protecting civilians under imminent threat of physical violence; and assisting the Malian authorities in their efforts to promote and protect human rights.

The Council welcomed the signing of the agreement over the past weeks by the Malian Government and the coalitions of armed groups that had remained outside the accord – the Plateforme, and the Coordination des Mouvements de l’Azawad, as “a historic opportunity” to achieve lasting peace in Mali. At the same time, the Council strongly condemned the violations of the ceasefire by the Malian parties, which had led to loss of life, including of civilians, and displacement and undermined the peace process.

Through the resolution, the Council urged the Government of Mali, the Plateforme and Coordination armed groups to fulfil their commitments under the Agreement on Peace and Reconciliation in Mali, and further urged all parties to immediately and fully respect and uphold the ceasefire agreement of 23 May 2014, the Arrangement sécuritaire pour une cessation des hostilités of 5 June 2015, and the declarations of cessation of hostilities of 19 February 2015 and 24 July 2014.

The Council further expressed its readiness to consider targeted sanctions against those who undermined the peace process, notably by resuming hostilities, violating the ceasefire, or taking actions to obstruct or threaten the implementation of the Agreement, as well as those who, among other things, attacked and took actions to threaten MINUSMA, international security presences or humanitarian personnel.

It demanded that all armed groups in Mali put aside their arms, cease hostilities, reject the recourse to violence, cut off all ties with terrorist organizations and recognize, without conditions, the unity and territorial integrity of the Malian State.

Further to the resolution, the Security Council expressed its concern at the slow pace of deployment of personnel and equipment of MINUSMA, which had seriously hindered the Mission’s ability to fully implement its mandate since its establishment on 25 April 2013. It nevertheless welcomed efforts by the Secretary-General to accelerate that deployment and to provide adequate training to improve the security and safety of MINUSMA’s personnel in a complex security environment. 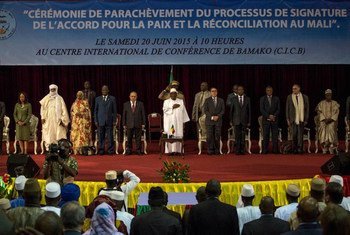 20 June 2015
UN Secretary-General Ban Ki-moon welcomed Saturday the signature, earlier today, of the Agreement for Peace and Reconciliation in Mali by the Coordination coalition of armed groups in Bamako.