UNHCR/K. Holt
An elderly woman waits among a crowd of other Burundian refugees for assistance in Rwanda’s Mahama Refugee Camp.
28 June 2015

Reiterating his appeal to all Burundian political leaders to consider the wider interest of the people of their country, United Nations Secretary-General Ban Ki-moon today expressed concerns about the Government's insistence on going ahead with elections on 29 June despite the prevailing political and security environment in the country.

“The Secretary-General Ban Ki-moon emphasizes the responsibility of the Government of Burundi to ensure that elections take place in a secure environment and also to guarantee the safety and security of UN observers so that they can perform their mandated responsibilities free from intimidation or harassment,” according to a statement issued this afternoon by the UN Spokesperson.

The Security Council, including through its resolution 2137 (2014), has mandated the UN Observer Mission in Burundi (MENUB) to observe the elections, while the International Facilitation Team “has been working hard” in Bujumbura to assist the Burundian parties to reach a consensus on the way forward for holding “free, fair inclusive and peaceful elections.”

“The Secretary-General deplores the intransigence of the parties that caused those important efforts to be inconclusive,” the statement adds.

He reiterated his appeal to all Burundian political leaders to consider the “wider interest” of the people of their country and to resolve political issues through dialogue “in order to preserve peace and strengthen national reconciliation.”

Condemning recent attacks reported in the country, Mr. Ban in the statement also appealed to all Burundians to refrain from violent acts, in line with the Charter of Non-Violence agreed by all parties.

“MENUB will continue to work in a professional and impartial manner, in accordance with national laws applicable to electoral matters and international instruments, principles and rules of election observation,” adds the statement.

Burundi's political turmoil started in early April when President Pierre Nkurunziza said he would stand for a third term, a decision denounced as unconstitutional by the opposition.

Warning that the governing party and its youth militia use violence to limit freedom of speech and hate speech to obtain certain electoral outcome, Pablo de Greiff, the UN Special Rapporteur on the promotion of truth, justice, reparation and guarantees of non-recurrence stressed the utmost importance to disarm those youth militias.

“Voters must be free to support or to oppose any political party…without undue influence or coercion of any kind which may distort or inhibit the free expression of the elector's will,” Mr. de Greiff underscored.

Today's statement closely follows a similar expression of concern issued this past Friday, 2 June, when the Secretary-General encouraged the country's authorities to consider the postponing of the elections. The legislative elections are scheduled for tomorrow, the presidential election for July 15. 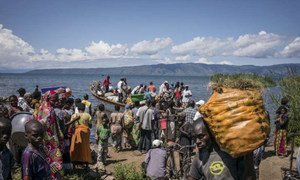