UN Photo/Tobin Jones
Singers wearing hats advocating “No Torture” line up before performing at a Human Rights Day event outside of Mogadishu Central Prison in Somalia on 10 December 2013.
26 June 2015

United Nations Secretary-General Ban Ki-moon has renewed his call for Member States to repudiate the use of torture amid the international community’s ongoing fight against terrorism and provide victims of the inhumane practice with support critical in helping them rebuild their lives.

Marking the 2015 edition of the International Day in Support of Victims of Torture, observed annually on 26 June, the Secretary-General today reminded governments around the world of the “absolute prohibition on the use of torture at any time and under any circumstances under international law,” adding that when used in a systematic manner, torture can even constitute a crime against humanity.

“As States grapple with their response to violent extremism, it is essential to stress that torture can never be used to fight terror; in fact torture terrorizes,” Mr. Ban declared in a message issues earlier this morning.

“The use of torture is wrong from a moral point of view and wrongheaded from a strategic standpoint,” he continued. “Practicing torture hurts the very cause of democracy, justice and human rights that the terrorists seek to undermine, and it gives them fuel to gain new recruits.”

At the same time, Mr. Ban also underscored the growing importance of rehabilitation centres for victims of torture around the world which give humanitarian, medical and legal assistance to victims and their relatives.

Every year, the UN Voluntary Fund for Victims of Torture initiative supports hundreds of these centres and anywhere between 50,000 to 70,000 victims and their relatives.

However, the Fund, which relies on voluntary contributions from governments, the private sector and individuals, has seen its donations drop to $8.4 million in 2012 – a 30 per cent decrease since 2008. Its donor base has also shrunk from 38 donors in 2008 to 22 in 2012.

“Victims of torture have the right to compensation and rehabilitation. They also deserve and have the right to know the truth. That is why it is so critical to investigate instances of torture, identify the perpetrators and bring them to justice,” the Secretary-General added. “I thank States and private donors supporting the Fund, and I urge others to consider making a contribution.”

“Let us use this International Day in Support of Victims of Torture to mobilize help for them and action to prevent future cases. Assisting the affected individuals and stopping this crime will benefit whole societies and our collective future,” Mr. Ban concluded. 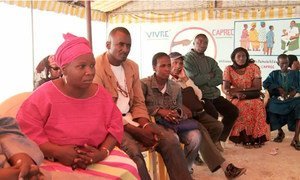 To mark the International Day in Support of Victims of Torture, Secretary-General Ban Ki-moon joined with United Nations independent human rights experts urging Member States to step up efforts to promote a victim-centred approach which includes access to redress and rehabilitation services.