The business community and the private sector can make a difference as United Nations Member States are in the process of formulating a new sustainability agenda, Secretary-General Ban Ki-moon today said at the General Assembly, which was meeting to celebrate the 15th anniversary of the UN Global Compact.

“The business agenda and the sustainable development agenda are converging in new and exciting ways. What began as a simple call to action has become a global force for good,” the UN chief told a special Assembly meeting, 'Global Compact+15: Business as a Force for Good' which marked the initiative's 15th anniversary.

The Global Compact is a UN initiative to encourage businesses worldwide to adopt sustainable and socially responsible policies, and to report on their implementation. So far, more than 8,000 business participants have committed to doing business responsibly, in line with universal principles encompassing human rights, labour rights, environmental protection and anti-corruption efforts.

As Member States are forging a new development agenda for the next 15 years and a collective way forward on climate change, “our gathering today takes place in a potentially transformative year,” stressed Mr. Ban, convinced that business will be “indispensable” in the period ahead.

By respecting and supporting universal principles in their operations, and by pioneering new business models and forming innovative partnerships, the Secretary-General advised, business leaders are “poised” to make long-lasting contributions to the cause of global sustainability.

“This is a time of grave test but also one of tremendous promise. We can be the first generation to erase poverty from the face of the planet. We have a golden opportunity in Paris in December to reach a meaningful agreement that can stave off planetary disaster,” he stressed, referring to the upcoming Conference of the Parties of the UN Framework Convention on Climate Change.

On the governance front, he emphasized, Governments and political leaders need to work with the UN to stamp out corruption, which includes aligning lobbying efforts with sustainability commitments.

“You should not speak out publicly for climate action while working behind-the-scenes against sensible climate-friendly legislation,” the UN chief urged.

While encouraging business leaders to work within their trade and industry associations to spread the tenets of sustainability, he asked leading investors to reward good business practices in financial markets.

“We are here together in the belief that business can and must be a force for good,” he concluded.

In his remarks, Assembly President Sam Kutesa said that since its founding, The Global Compact had played an invaluable role in enlisting new actors, particularly in the business sector, to address many of the world’s most pressing problems.

“This event is particularly timely because in the context of ongoing negotiations on the post-2015 development agenda, the discussions provide and important opportunity to reflect on the important progress made through the Global Compact and the important role the business sector can play in helping to achieve our future development objectives.”

Indeed, Mr. Kutesa continued, achieving the proposed SDGs will require provision of adequate means of implementation for the post-2015 development agenda and a strengthened global partnership for development.

“In working towards greater involvement and contribution of the private sector, we must find innovative ways of scaling up investments that contribute to equitable and sustainable growth and development. More private capital is required for investment in critical sectors…such as energy, infrastructure and ICT,” and with this in mind, he said the Global Compact, which brings together a diverse cross-section of companies from a broad range of countruies, has a major role to play in this regard.

Georg Kell, outgoing Executive Director, UN Global Compact stressed a similar point in an interview with the UN News Centre earlier this month, saying that the initiative’s job has been to win over companies that going global does not just mean having more short-term profits and looking for the cheapest allocation or sourcing capabilities.

“But rather to understand that for markets to grow, and for your own future prospects to be successful, it makes sense to integrate, in your strategic thinking and operations, environmental, social and governance issues,” he said.

Also today, the Secretary-General announced the appointment of Lise Kingo, of Denmark, as Executive Director of the United Nations Global Compact. She will succeed Georg Kell, who retires later this year after over 25 years of service to the United Nations.

Ms. Kingo, who assumes the role on 1 September, was most recently the Chief of Staff, Executive Vice President and member of the Executive Management at Novo Nordisk A/S from 2002 to 2014.

♦ Receive daily updates directly in your inbox - Subscribe here to a topic.
♦ Download the UN News app for your iOS or Android devices.
Global Compact

Membership to UN ethical business initiative swells, but much work still to be done 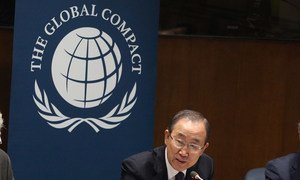