OCHA/Josephine Guerrero
A meal being prepared at the Al-Riad shelter, Aleppo, Syria.
25 June 2015

Humanitarian and development efforts targeting millions of Syrian refugees are at risk of collapsing due to a severe funding crisis, the United Nations refugee agency (UNHCR) warned today.

According to a report released earlier this afternoon by more than 200 partners in the Regional Refugee and Resilience Plan in Response to the Syria Crisis, also known as the ‘3RP,’ the UN’s current programmes targeting Syrian refugees are facing a $3.47 billion funding gap.

The shortfall, the report adds, means 1.6 million refugees have had their food assistance reduced so far this year; that 750,000 children are unable to attend school; and that life-saving health services are becoming too expensive for many.

“We are so dangerously low on funding that we risk not being able to meet even the most basic survival needs of millions of people over the coming six months,” lamented UN High Commissioner for Refugees António Guterres in a press release.

The 3RP partners have warned that if more funds were not forthcoming, up to 130,000 vulnerable families would not be provided with cash assistance to help them meet basic needs and vulnerable people would stop receiving monthly food vouchers altogether.

The four-year Syria conflict has generated a steady outflow of almost 4 million refugees into neighbouring countries such as Lebanon, Turkey, Iraq and Jordan, burdening those countries’ infrastructures and leading to overcrowded settlements where many refugees struggle amid high unemployment and precarious services.

According to the latest data available, Turkey alone is host to 1,772,535 registered Syrian refugees – more than any other in the world – with about 259,000 living in 23 camps set up and managed by the Government.

As a result, the 3RP have urged Member States to ramp up their financial assistance adding that if the call for action remains unheeded, a generation of Syrians would be left behind and neighbouring countries would continue to struggle to provide a public good “they cannot and should not have to bear alone.”

“The Syria situation is the biggest humanitarian and development crisis in recent history, with implications for global peace and security. There appears to be no political solution in sight,” cautions the report. “The international community has no choice but to continue responding to the ever-growing needs of refugees, and the needs of the communities and States that host them.” 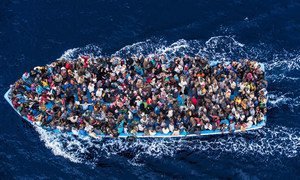 The international community is experiencing a dramatic shift in the situation facing the world’s refugees as a global surge in war, conflict and persecution has caused a record number of people to flee their homes in search of safety, the United Nations refugee agency reported today.