WHO/M. Vurens van Es
A Norwegian Red Cross field hospital deployed by WHO in coordination with Nepal’s Ministry of Health and Population in Sindhupalchok District.
25 June 2015

The United Nations World Health Organization (WHO) today warned the health of the people who survived Nepal's twin earthquakes could be at risk if regular services are not urgently rebuilt and restored in a country where 80 per cent of health facilities in the 14 most affected districts are damaged.

“We need to urgently restore regular health services for the millions of affected people – for the pregnant women, newborns, children, the aged, people with diseases such as TB (tuberculosis), heart ailments, diabetes, [among others]. Without critical services their health could be at serious risk,” Dr. Poonam Khetrapal Singh, Regional Director of WHO's South-East Asia Region, told the International Conference on Nepal's Reconstruction 2015 in the capital, Katmandu.

WHO, in a press release, said displaced populations continue to live in temporary shelters with sub-optimal hygiene, sanitation and water conditions.

“They are vulnerable to diseases and health risks in the ongoing rainy season and the approaching winter,” according to WHO. “Many of the affected people – the injured, need long term care or rehabilitation. A large number of people need mental health care to cope with the trauma caused by the calamity.”

WHO said it has been working closely with the Nepali Ministry of Health and Population on the health sector response that has focused on trauma management and temporary reinstatement of the critical health services, and is now transitioning to early recovery and reconstruction.

One of WHO's key interventions during ongoing monsoon season is the medical camp kits consisting of water proof tents that are strategically located in the most affected districts to serve as temporary patient consultation and treatment facilities and to ensure the “critical” continuity of services.

With 80 per cent of health facilities in the 14 most affected districts damaged, the task of reconstruction is huge but equally important, WHO said.

Dr. Singh said long-term development and the scaling up of risk reduction and preparedness will be key features of WHO's contribution in the recovery and reconstruction phase.

WHO said it has been supporting Nepal's disaster risk reduction and emergency preparedness initiatives and as a result, the major hospitals in Kathmandu covered under these initiatives withstood the earthquakes and continued to function with its trained staff demonstrating the importance of resilient health facilities in emergencies for saving lives.

Two separate earthquakes and a series of powerful aftershocks struck Nepal in April and May, killing more than 8,000 people and devastating large parts of the country.

"This conference is an opportunity to build a new partnership to support Nepal to get back on its feet and to build back stronger and safer," Mr. Ban declared as he applauded the Nepalese people for having "stood strong during this crisis."

"The United Nations stands ready to support the government and people of Nepal in this endeavour," he added. 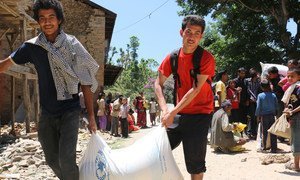 Thousands of porters are carrying food and other relief high into Nepal's mountains, and repairing trails as they go, as part of a shift by the United Nations World Food Programme (WFP) from emergency response to longer-term recovery, after the 25 April earthquake.