UNHCR/A. Zabarah
Emergency aid being offloaded from a UNHCR vessel at the Hodeidah Port, Yemen.
25 June 2015

The United Nations humanitarian arm today announces it will provide a critical injection of emergency funding in order to accelerate relief efforts to war-trapped civilians in Yemen, the Organization has confirmed.

According to an announcement made by the UN Office for the Coordination of Humanitarian Affairs (OCHA), $25 million will be released from the UN Central Emergency Response Fund (CERF) in order to support lifesaving projects including the provision of fuel, medicine, emergency supplies, clean water, sanitation services and nutrition programmes to Yemenis in need.

“Innocent civilians in Yemen are paying a terrible price,” said UN Under-Secretary-General for Humanitarian Affairs and Emergency Relief Coordinator, Stephen O'Brien, in a press release. “They face daily airstrikes, shelling and fighting while medical supplies, fuel and food are running out, and basic services have collapsed.”

The humanitarian situation in Yemen has been progressively deteriorating by the day despite ongoing UN-backed efforts to help national stakeholders reach a political solution to the crisis.

The collapse of basic services and extreme shortages of food and fuel have had a devastating impact across the whole country, added Mr. O'Brien during a press conference.

“More than 21 million people – that's 80 per cent of the population – now need humanitarian assistance. Health facilities report that over 2,800 people have been killed and 13,000 injured since the violence escalated in March. At least 1,400 civilians have lost their lives; these numbers are likely to be significant underestimates.”

According to a recent joint survey released by the UN Food and Agriculture Organization (FAO) and the World Food Programme (WFP), six million people in Yemen are slipping towards severe hunger and now need emergency food and life-saving assistance, a sharp increase from the last quarter of 2014. In addition to the population facing a food security 'emergency,' over 6.5 million people are classified as facing a food insecurity security 'crisis.'

Meanwhile, the study added, 10 out of Yemen's 22 governorates are now classified as facing food insecurity at 'emergency' level. Millions more are highly vulnerable and could easily fall into emergency levels unless there is a dramatic improvement in the availability and access to food at prices that most people can afford.

The humanitarian stresses brought on by the conflict, however, have only compounded the already severe human toll of the fighting.

OCHA has noted that thousands of people in the country have been killed and injured by airstrikes and ground fighting in the last three months alone while over 1 million people have fled their homes.

Finally, the dire situation has also aggravated the country's health infrastructure as a recent World Health Organization (WHO) analysis reported over 3,000 suspected dengue cases across the country. 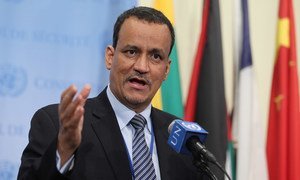 Yemeni stakeholders remain on the path towards reviving a much-needed political transition despite the country's ongoing hostilities, the United Nations Special Envoy for the Gulf state, Ismail Ould Cheikh Ahmed, said today as he urged all parties to observe a humanitarian truce aimed at helping the delivery of critical relief aid to Yemeni civilians.