With temperatures soaring to over 120 degrees Fahrenheit in some parts of Iraq and the number of people fleeing violence topping 3 million, the World Health Organization fears the closing of nearly 90 per cent of the health centres in conflict-affected areas unless donors respond to an urgent appeal to ensure their continuing operation.

WHO spokesperson Christian Lindmeier said his agency urgently needs $60 million to ensure the continuing operation of 77 health centres in Iraq, including 12 mobile clinics, which are on the verge of closing this month.

The 77 health facilities represent 88 per cent of current health projects in conflict-affected areas in the country, Mr. Lindmeier said at the UN press briefing in Geneva, Switzerland.

He also said that temperatures in Iraq were soaring, topping 120 degrees in some locations.

“That situation,” the spokesperson said, “coupled with poor access to healthcare and the 3 million internally displaced people who were forced to live in tents, there had been a rise in disease, namely dehydration and diarrhoea.”

Meanwhile, the International Organization for Migration (IOM) announced that the number of Iraqis who have been displaced now stood at 3,087,372 and were found across all of Iraq’s 18 governorates.

Of the total displaced population, he said, 55 per cent were displaced after 15 May when Ramadi city, in the Anbar governorate, was entirely occupied by armed groups. 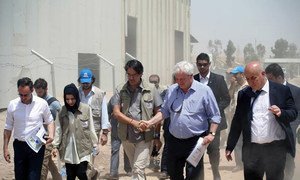