As the result of a three-year partnership, the United Nations Office on Drugs and Crime (UNODC) and the Afghan Government today launched the first-ever interactive online system for all counter-narcotics-related data in the country.

Following the Government’s announcement of a National Mobilization Against Narcotics to mark the upcoming International Day Against Drug Abuse and Illicit Trafficking, commemorated annually on 26 June, the Ministry called the new system a key component of its leadership and coordination role in countering drugs.

The online tool compiles verified data by sector and location from the nine entities involved in counter-narcotics related initiatives – namely the Afghan Ministries of Justice, Interior, Public Health, Rural Rehabilitation and Development, Agriculture, Irrigation and Livestock, and the Attorney General's Office – together with international partners, including the Bureau of International Law Enforcement and UNODC.

Through the system, stakeholders can access the most current data on all available narcotics-related indicators in Afghanistan, including eradication, cultivation, drug price, seizures and imprisonment. With the ability to be used in trend analysis, policy development and evaluation, it becomes a key tool for policy makers, the international community and all those involved in countering narcotics in Afghanistan. There is also scope to expand the system as required going forward.

The reporting system is the latest collaborative document – together with the Annual Opium Survey and the Afghanistan Drug Report – from the research capacity-building partnership between the Afghan Government and UNODC. 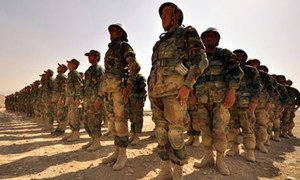