On International Day, UN reminds world of invisible plight of millions of widows and their children

In India, members of a network of single women, Ekal Nari Shakti Sangathan, that helps secure the right of widows to live with dignity and justice. UN Women/Gaganjit Singh (File)
23 June 2015

United Nations Secretary-General Ban Ki-moon is urging the world on the fifth International Widows’ Day “to assert the rights of those whose bereavement is followed by exclusion, abuse or the loss of homes, livelihoods and social standing.”

In his message on the Day, Mr. Ban said the death of their partner can leave widows in precarious living conditions, particularly in areas of conflict, natural disaster and humanitarian crisis.

“In societies that view women as whole only when they are married, widows are often disregarded or stigmatized,” he said. “Without the economic and social protection of their husbands, many widows are treated as financial burdens by their families. They may lose their rights to inheritance and property, or even be forced out of their communities.”

The UN General Assembly declared 23 June International Widows’ Day to give special attention to the millions of widows and their children around the world who are “absent in statistics, unnoticed by researchers, neglected by national and local authorities and mostly overlooked by civil society organizations.”

“On International Widows' Day, we reassert the equality of men and women,” the UN Secretary-General said, adding that “the United Nations is working on specific measures that can help widows.”

“We must erase the social stigmatization and economic deprivation that confronts widows; eliminate their high risk of sexual abuse and exploitation; and remove the barriers to resources and economic opportunities that constrain their future,” he said. “We also must advance widows' equal rights to inheritance, property, land and other assets.”

“This will be an essential element in realizing our vision of a life of dignity for all,” he said.

According to a UN fact sheet on the state of the world’s widows, “vast numbers of women are widowed due to armed conflict. In some parts of eastern Democratic Republic of the Congo, for instance, it is reported that around 50 per cent of women are widows, while there are an estimated three million widows in Iraq and over 70,000 in Kabul, Afghanistan.

In addition, it said that “in many countries, widowhood is stigmatized and seen as a source of shame. Widows are thought to be cursed in some cultures and are even associated with witchcraft. Such misconceptions can lead to widows being ostracized, abused and worse.” 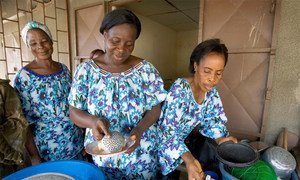 No woman should lose her status, livelihood or property when her husband dies, yet millions of widows in our world face persistent abuse, discrimination, disinheritance and destitution stressed United Nation Secretary-General Ban Ki-moon today in his message for this year’s International Widows’ Day.