As global challenges proliferate from Yemen to South Sudan and beyond, the United Nations and Europe must unite in the fight to defend democracy and international solidarity, Secretary-General Ban Ki-moon declared today in a sweeping address that touched on issues ranging from the rise of violent extremism to the threat of climate change.

“The UN is doing everything it can to save lives and bring peace wherever possible. It is working to ensure accountability for all,” the Secretary-General affirmed in remarks delivered to the Council of Europe in Strasbourg earlier this morning. “The crimes that are shocking our consciences will not go unpunished.”

However, continued Mr. Ban, Europe’s active participation in defending the rights of civil society, relieving the pressures of the global migration crisis, confronting the virulent spread of violent extremism, and working for a sustainable future for all, was needed now more than ever.

“For this reason, I urge you to reinforce your partnership with the United Nations,” he added.

While democracy is on the rise globally, the UN chief noted, democratic institutions in many parts of the world are nonetheless being eroded as judicial independence and press freedom come under attack. In many instances, he said, space for civil society – a lynchpin of many modern European democracies – is disappearing: more than 50 countries, including in Europe, have passed nearly 100 laws restricting the operations and funding of non-governmental organizations (NGOs).

“We must raise our voices against those who block non-governmental organizations and human rights defenders,” the Secretary-General told the gathered delegates. “I urge the Council of Europe to join me in calling for an end to this curbing of essential freedoms.”

At the same time, Mr. Ban spotlighted the equally critical role played by NGOs, independent media, and human rights defenders in tempering the advance of another looming threat: violent extremism.

“Crimes in the name of religion are crimes against religion,” he stated. “We stand with Europe as it struggles to combat a rise in anti-Semitic and anti-Muslim attacks and discrimination.” 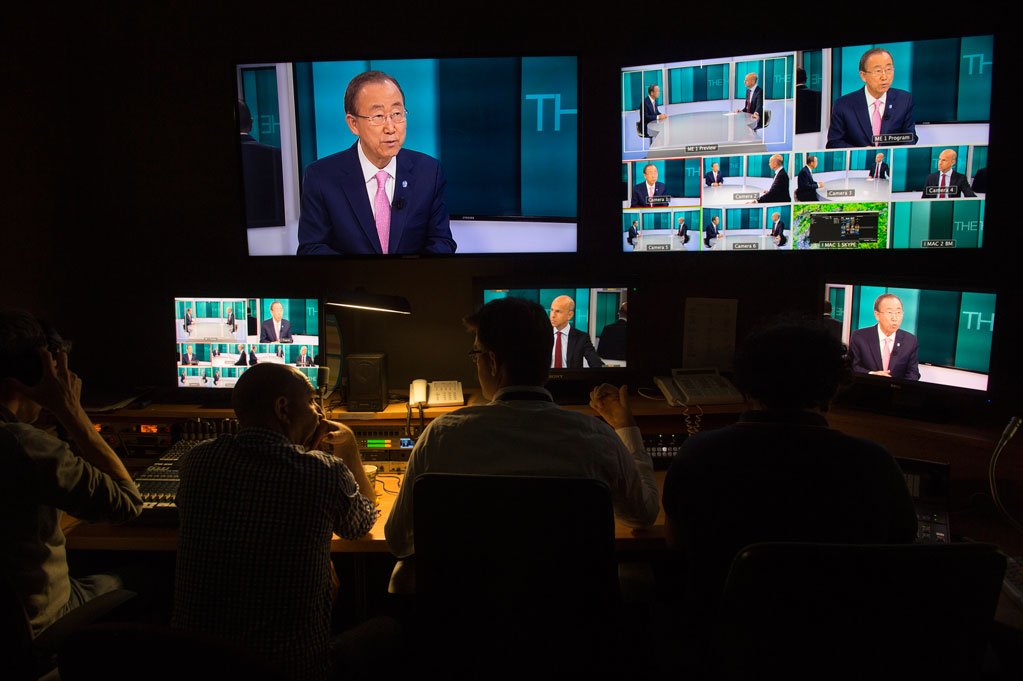 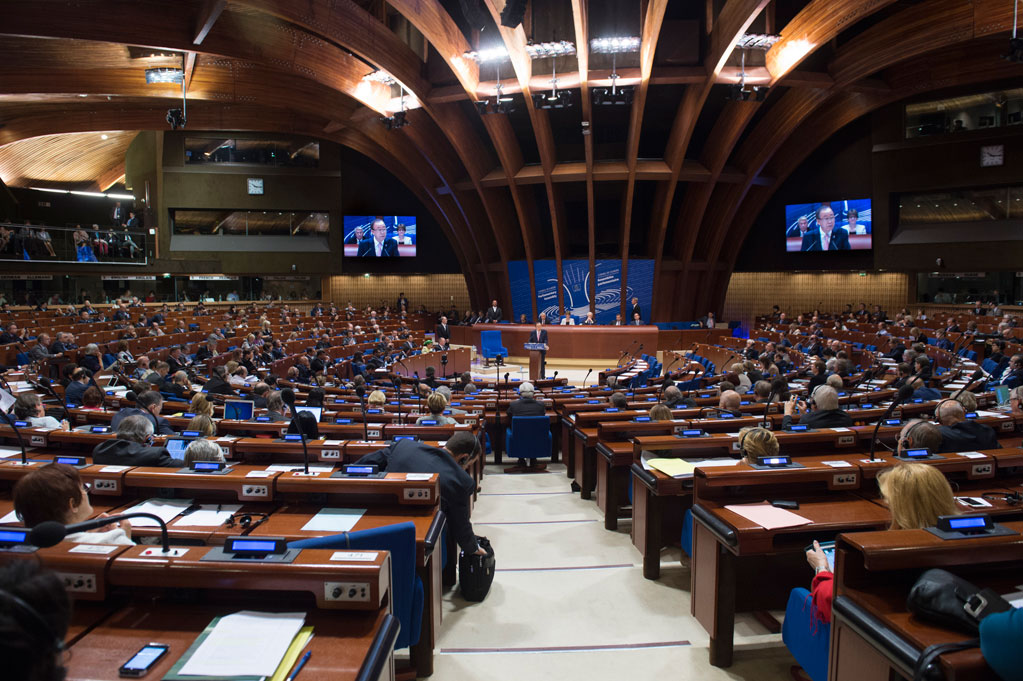 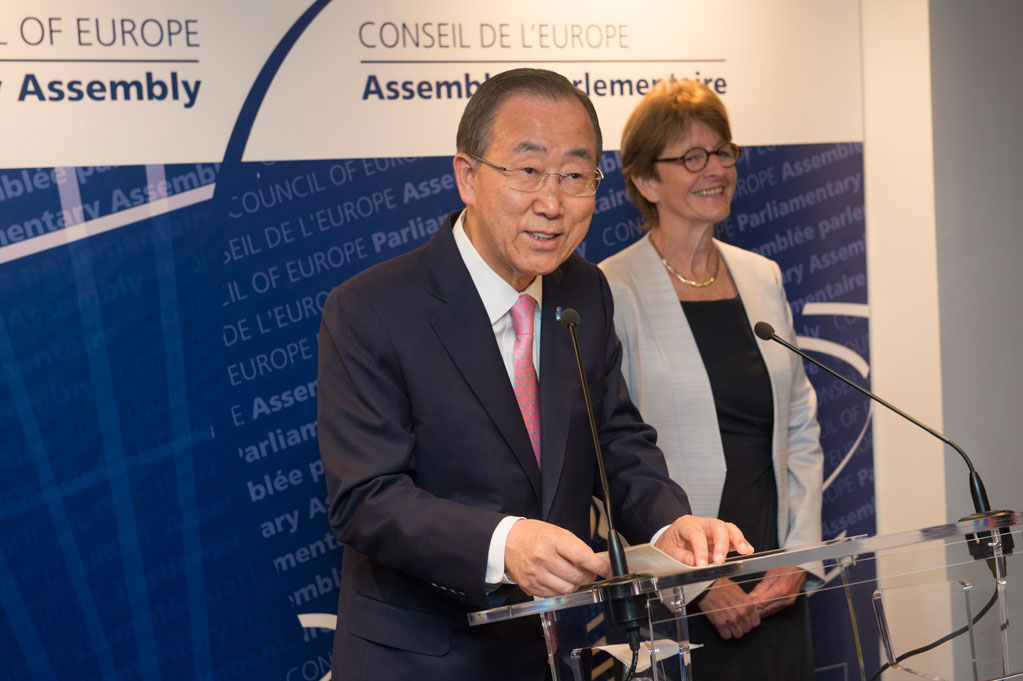 Secretary-General Ban Ki-moon speaks to journalists, following his meeting with Anne Brasseur (right), President of the Parliamentary Assembly of the Council of Europe. UN Photo/Eskinder Debebe 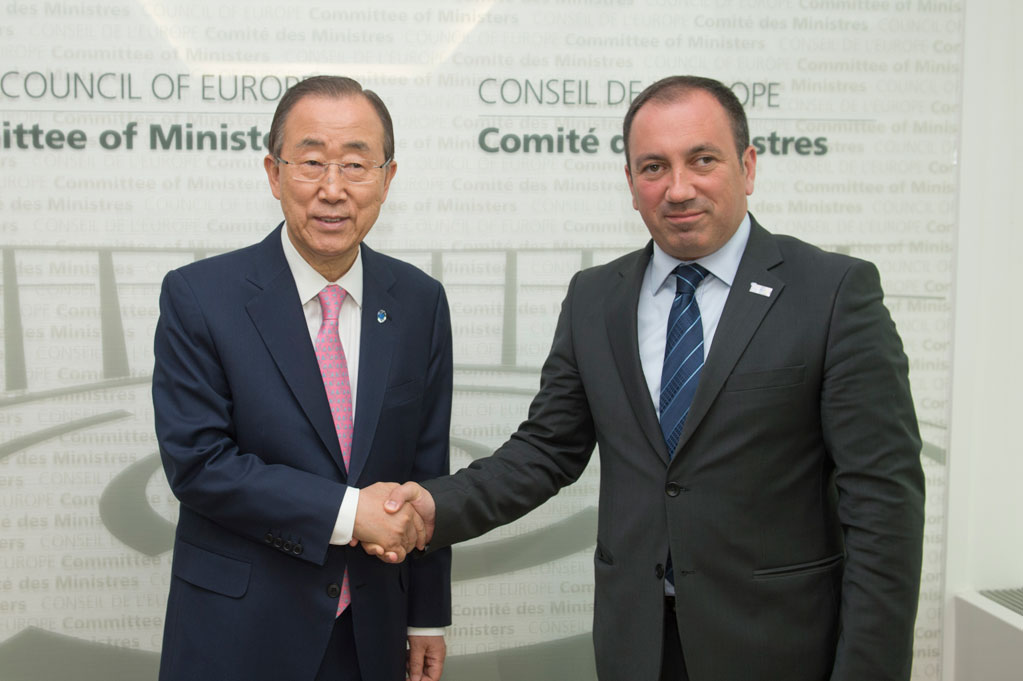 Secretary-General Ban Ki-moon (left) meets with Foreign Minister Igor Crnadak of Bosnia and Herzegovina and President of the Committee of Ministers of the Council of Europe. UN Photo/Eskinder Debebe

Tensions in Europe related to violent extremism and religious discrimination have been on the rise in recent months, particularly since the 7 January attack by Islamist extremists against the editorial offices of French magazine Charlie Hebdo, which resulted in the deaths of 11 people, including the magazine’s cartoonists and editor.

The attackers then engaged police officers before proceeding with two subsequent hostage takings at a Jewish supermarket in Paris, and a print shop northeast of the French capital. Ultimately, 17 people were killed.

Amid the growing sectarian tensions in Europe and across the world, the Secretary-General explained that in November he would unveil a Plan of Action to Prevent Violent Extremism to the UN General Assembly in an effort “to reinforce international unity around the shared principles that violent extremists seek to undermine.”

Against that backdrop, he welcomed the Council of Europe’s efforts to address the issue and how radicalization can lead to terrorism as well as the European body’s adoption of a Political Declaration, Action Plan and the Additional Protocol to the Convention on the Prevention of Terrorism.

Sea crossings from the Middle East and North Africa to Europe have surged, with the most recent official figures showing that as of 8 June a total of 103,000 refugees and migrants had arrived in Europe: 54,000 in Italy, 48,000 in Greece, 91 on Malta and 920 in Spain. This includes record numbers of refugees landing daily in the Greek islands. Meanwhile, the overall forced displacement numbers in Europe for the 2014 reporting period totalled an overwhelming 6.7 million.

The Secretary-General observed that while poverty and poor governance as well as conflict and persecution were pushing migrants and refugees towards Europe, Europe itself would need to “lead in global solidarity” and promote legal channels of migration, including resettlement, family reunification and work and study visas.

“I call on this Council to help those who look to Europe for protection from tyranny, lawlessness and deprivation,” he concluded. “We must reject anti-migrant rhetoric and recognize migrants’ positive contributions to your societies.”

In his meetings, Mr. Ban underlined the UN’s objectives towards achieving a roadmap for a sustainable future and called for greater international unity as the Organization barrels towards the creation of a new development agenda and a revolutionary climate agreement scheduled to be reached in Paris in December.

Currently in Europe, UN Secretary-General Ban Ki-moon made an official visit to Luxembourg, where he met with a number of Government officials, including the Prime Minister, Xavier Bettel.