The global community will fail millions of children if it does not focus on the most disadvantaged, the United Nations Children's Fund (UNICEF) warns in its final report on achievement of the child-related UN Millennium Development Goals (MDGs), emphasizing that “we were not ambitious enough” to reach those with the greatest needs.

“As the global community comes together around the sustainable development goals [SDGs], we should set our sights first on reaching the children left behind as we pursued the MDGs,” UNICEF Executive Director Anthony Lake writes in the foreword of the report Progress for Children: Beyond Averages, the agency's final report on the child-related MDGs released late yesterday evening.

The report concludes that despite significant achievements, unequal opportunities have left millions of children living in poverty, dying before they turn five, without schooling and suffering chronic malnutrition. Indeed, UNICEF warns that progress still eludes the nearly 6 million children who die every year before their fifth birthday, the 289,000 women who die every year while giving birth and the 58 million children who don't go to primary school.

“The MDGs helped the world realize tremendous progress for children – but they also showed us how many children we are leaving behind,” Mr. Lake said press release on the report. “The lives and futures of the most disadvantaged children matter – not only for their own sake, but for the sake of their families, their communities and their societies.”

Mr. Lake also noted in the report that “in setting broad global goals the MDGs inadvertently encouraged nations to measure progress through national averages. In the rush to make that progress, many focused on the easiest-to reach children and communities, not those in greatest need. In doing so, national progress may actually have been slowed.” 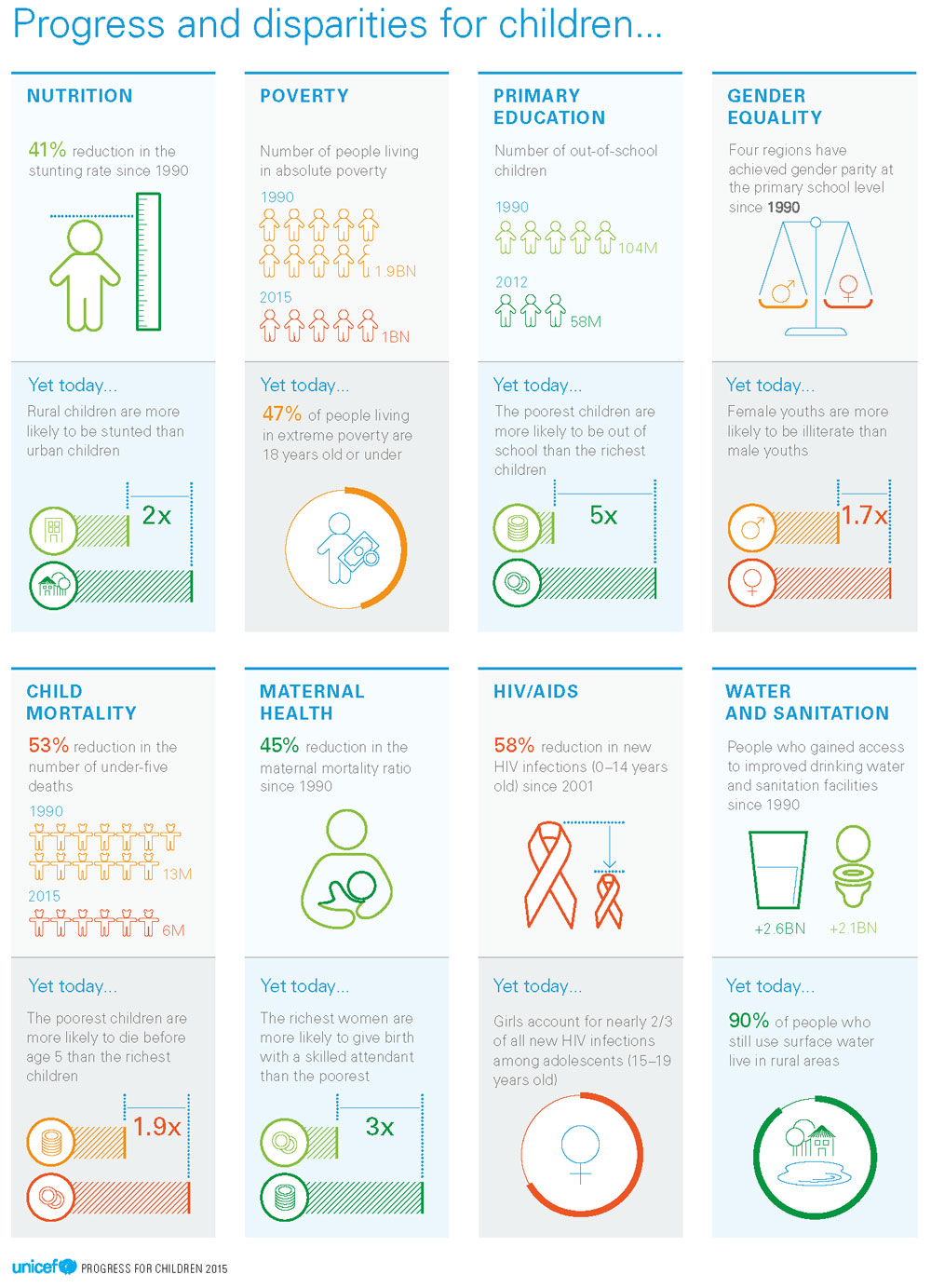 UNICEF said that at current rates of progress continued failure to reach these children can have dramatic consequences and listed the following:

The landmark Millennium Development Goals (MDGs) were agreed 15 years ago and while there has been significant progress in meeting the targets challenges persist. With the deadline of the MDGs set for the end of this year, UN Member States are crafting a new set of targets, now known as sustainable development goals (SDGs).

This new agenda will aim to address a raft lingering and emerging challenges, such as the fact that globally, 73 million young people are looking for work and many more are trapped in exploitative jobs. The new global sustainability agenda is expected to be approved by world leaders at special summit ahead of the annual high-level segment of the General Assembly this coming September.

“The SDGs present an opportunity to apply the lessons we have learned and reach the children in greatest need – and shame on us if we don't,” Mr. Lake said “For greater equity in opportunity for today's children means less inequality and more global progress tomorrow.”

While child survival rates have increased dramatically since 1990, one million babies each year do not see their second day of life, many succumbing to complications during labour and delivery that could be easily prevented with simple, cost effective interventions, according to a report released today by the United Nations Children’s Fund (UNICEF).