The President of the United Nations General Assembly announced today that the first-ever United Nations Nelson Rolihlahla Mandela Prize will be awarded to Dr. Helena Ndume, of Namibia, and Jorge Fernando Branco Sampaio, of Portugal.

“The prize recognizes the achievements of those who dedicate their lives to the service of humanity by promoting UN purposes and principles while honouring Nelson Mandela’s extraordinary life and legacy of reconciliation, political transition and social transformation,” said Sam Kutesa, President of the 69th session of the General Assembly, which established the prize on June 2014.

The entrusted Selection Committee decided that the inaugural award would be given to two laureates. The Nelson Mandela Prize is an honorary award that will be presented once every five years as a tribute to the outstanding achievements and contributions of two individuals (one female and one male).

According to the Assembly, Dr. Ndume is an ophthalmologist whose life’s work has been devoted to treating blindness and eye-related illnesses in Namibia and throughout the developing world.

Mr. Sampaio led the struggle to restore democracy in Portugal – including throughout his tenure as Lisbon’s Mayor from 1989 to 1995 and as the 18th President of the Republic from 1996 to 2006.

Nominations were received from a broad variety of sources – including UN Member and Observer States, entities and intergovernmental organizations.

On behalf of Member States and of himself, President Kutesa warmly congratulated the co-laureates and thanked the Selection Committee for its hard work and dedication.

Chaired by the Assembly President, the UN Selection Committee was composed of the Permanent Representatives of Algeria, Latvia, Mexico, Saudi Arabia and Sweden – representing the five UN geographical regional groups. The Permanent Representative of South Africa was an ex-officio member of the Committee and the UN Department of Public Information served as the secretariat.

The award ceremony will take place on 24 July 2015, at UN Headquarters in New York as part of the annual UN commemoration of International Nelson Mandela Day. The Day is typically celebrated on the late South African leader’s birthday, 18 July, when the UN joins a call by the Nelson Mandela Foundation to devote 67 minutes of time to helping others.

For 67 years Nelson Mandela devoted his life to the service of humanity — as a human rights lawyer, a prisoner of conscience, an international peacemaker and the first democratically elected president of a free South Africa. 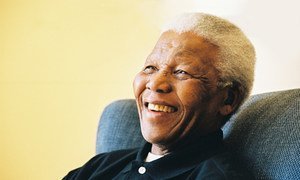