World Bank/Maria Fleischmann
A healthy diet can help to alleviate risk factors for a range of chronic diseases linked to obesity.

22 June 2015
Childhood obesity does not arise from lifestyle choices made by the child, the World Health Organization (WHO) said today, stressing that the huge problem, especially in developing countries on the marketing of sugar-rich non-alcoholic beverages, ultra-processed, energy-dense, nutrient-poor foods.

“Childhood obesity can erode the benefits that arrive with social and economic progress,” WHO Director General Dr. Margaret Chan told the Commission on Ending Childhood Obesity, which is meeting in Hong Kong. “Childhood obesity must be accepted as a significant and urgent threat to health that is relevant in all countries. Governments must take the lead.”

Dr. Chan praised the interim report on the work carried out thus far by the Commission and commended the group’s warning that “voluntary initiatives are not likely to be sufficient.”

“To be successful, efforts aimed at reducing the marketing of unhealthy foods and beverages need support from regulatory and statutory approaches,” she said.

She also noted that “perhaps most importantly, you defined a moral responsibility and stated where it must lie. None of the factors that cause obesity are under the control of the child.”

She urged the Commission to turn its findings and new thinking into further recommendations and menus of policy options.

“Industry must have no say on the technical guidance issued by WHO,” she said. “And industry cannot participate in the formulation of public health policies. Both areas are prone to conflicts of interest. Both must be protected from influence by industries with a vested interest.”

And she flagged that “the biggest harm comes from the marketing of sugar-rich non-alcoholic beverages and ultra-processed, energy-dense, and nutrient-poor foods, which are often the cheapest and most readily available, especially in poorer communities.”

Dr. Chan said she looked forward to receiving the Commission’s next report, which will form the basis of a final round of consultations during the second half of this year.

WHO’s governing body, the World Health Assembly, in 2014 approved the Global Action Plan for the prevention and control of noncommunicable diseases 2013-2020, which aims to achieve the commitments of the A HREF="http://www.un.org/en/ga/ncdmeeting2011/">UN Political Declaration on non-communicable diseases (NCDs).

The action plan will contribute to progress on nine global NCD targets to be attained in 2025, including halting of the global obesity rates in school-aged children, adolescents and adults.

WHO launches centre for virtual information exchange to head off pandemics 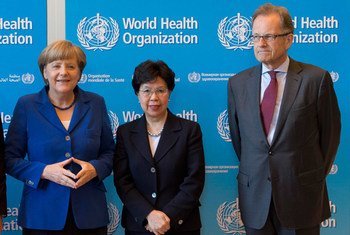 18 May 2015
The head of the United Nations World Health Organization (WHO) today promised a new $100 million emergency fund and a global health crisis workforce as part of a reform package prompted by the response to the Ebola outbreak in West Africa, saying: “I do not ever again want to see this organization faced with a situation it is not prepared, staffed, funded, or administratively set up to manage.”