With only 13 per cent of a United Nations emergency agricultural appeal met by donors, Nepal’s farmers trying to recover from this year’s twin earthquakes will not be able to plant rice seeds before the start of the monsoon rains expected in the coming days and replenish livestock, fertilizers, and tools lost in the disaster, according to the United Nations Food and Agriculture Organization (FAO).

“We only have a limited window to act,” said FAO Representative in Nepal Somsak Pipoppinyo.

Two separate earthquakes and a series of powerful aftershocks struck Nepal in April and May, killing more than 8,000 people and devastating large parts of the country. The disaster heavily disrupted agricultural activities, threatening the livelihoods of rural families.

“Agriculture is a critical priority because two-thirds of Nepalis depend on farming for their livelihoods,” according to the FAO Representative.

Some $23 million is urgently needed to support farmers in earthquake-hit Nepal resume agricultural activities and stave off the threat of prolonged food insecurity facing an estimated one million people, but to date, FAO has received only $3 million, or 13 per cent of the amount requested thanks to contributions from Belgium, Italy and Norway.

In a press release, FAO said “the most urgent needs for the current cropping season are seeds and fertilizers, followed by irrigation, tools and technical support. The repair and functioning of irrigation systems will be critical for the winter cropping season, as well as barley and wheat seeds.”

An FAO-led Agricultural Livelihood Impact Appraisal has found that in Nepal's six hardest-hit districts – half of all farming households – lost nearly all of their stored crops of rice, maize, wheat and millet. And some 16 per cent of cattle and 36 per cent of poultry were lost in the disaster “with detrimental effects on rural household consumption and income.”

In addition, the earthquakes destroyed farming tools, kitchen gardens and supplies of fertilizer and caused significant damage to small-scale irrigation.

But current levels of international assistance for Nepal’s earthquake-affected farmers will deliver "only a fraction" of the assistance urgently required, Mr. Somsak said.

He also noted how rice seeds have to be distributed urgently before the start of the heavy monsoon rains which are expect to arrive in the coming days, FAO said.

FAO has already distributed 40,000 (5 kilogram) bags of rice seeds to the six most-affected districts in time for farmers to plant before the monsoon, and is looking at ways of increasing the resilience of Nepal’s most vulnerable farmers to future crises. FAO will also look at mapping major earthquake cracks in key districts, monitoring any changes and establishing early warning systems to advise farmers of emerging landslide risks. 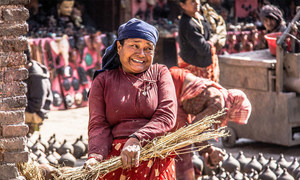 Against the backdrop of Nepal’s humming capital of Kathmandu, in a centre just off Durbar Square, it would be difficult to miss the elderly woman smiling warmly in a bright red sari. She is among those offering traditional, homespun goods, the cultural heritage of the country that is part of the allure that, for centuries, has compelled travellers to visit in droves.