UNICEF/NYHQ2014-1012/D'Aki
Suffering displacement, injury and even death, children continue to bear unacceptable consequences of the recent escalation of violence between Israel and Gaza.
18 June 2015

“A moral imperative and a legal obligation,” protecting children should never be jeopardized by national interests, United Nations Secretary-General Ban Ki-moon said today, deploring that 2014 was one of the worst years in recent memory for children in countries affected by conflict.

Speaking at the Security Council during an open debate on children and armed conflict, which focused on what the Council sees as an increasing trend of mass abductions, Mr. Ban reported on the enormous challenges the international community faces in “upholding the fundamental rights of tens of millions of children.”

“We have seen crises multiply and intensify, making protection more and more difficult. Grave violations against children have been an affront to our common humanity in the Central African Republic, Iraq, Nigeria, South Sudan and the Syrian Arab Republic.”

Alarmed at the suffering of “so many children” as a result of “Israeli military operations in Gaza last year,” the UN chief urged Israel to take concrete and immediate steps, including “by reviewing existing policies and practices,” to protect and prevent the killing and maiming of children, and to respect the “special protections” afforded to schools and hospitals.

Acknowledging that groups such as the Lord's Resistance Army (LRA) have kidnapped children for years, the Secretary-General warned that the scale and nature of this violation is changing.

“Abduction is now being used as a tactic to terrorize or target particular ethnic groups or religious communities, and children have been a particular focus.”

The shocking number of abductions by Da'esh and Boko Haram, he added, should not conceal the fact that this practice prevails in many other situations and is perpetrated by a great range of other non-state armed groups.

Mr. Ban also encouraged governments represented at the Council today to redouble their efforts to implement the goals of the Children, Not Soldiers campaign launched last year by his Special Representative for Children and Armed Conflict, Leila Zerrougui, who also briefed the Council today.

“I am pleased to report that we continue to make progress towards ending and preventing the recruitment and use of children by national security forces by 2016. We have seen important steps forward in 2014 in Afghanistan, Myanmar, the Democratic Republic of Congo (DRC) and Somalia,” said Mrs Zerrougui.

She said that only one case of recruitment by Government forces in the DRC was documented in 2014, with no reports so far in 2015. The Secretary-General also welcomed the release of 1,757 children from the Cobra Faction, a “bright spot” in an otherwise “bleak picture” in South Sudan.

In her wide-ranging remarks, Ms. Zerrougui explained that as conflicts have spread and intensified over the past year, some 230 million children currently live in countries impacted by fighting and unrest and more than five million others are on the run, fleeing war zones.

With “appalling impacts” on the welfare of children being felt from Africa to the Middle East and beyond, the findings set out in the Secretary-General's annual report “should not just shock us…this is a call to action for us all,” she said, highlighting the need to assess obstacles and assist children that fall victim to a raft of conflict-related ills, including extremist violence, abduction, sexual exploitation and deprivation of liberty.

Mr. Ban regretted that the contents of the annual report to the Council, which presents a strong overview of egregious violations suffered by children in conflict in 2014, have been the subject of “more controversy and discussions” than usual, “to the extent of threatening its integrity.”

“The [reporting] mechanism has withstood this scrutiny and the content of my report should speak for itself,” he assured.

Speaking to reporters near the end of the first half of the all-day Council meeting, Mr. Ban expressed his full support for his Special Representative and for the “excellent” work that she and her team have done.

Stressing the importance of ending impunity, he also wished to reassure his commitment to ensuring that the United Nations itself does “more and better” to prevent any abuse of children in the context of conflict. “Recent allegations concerning abuse in the Central African Republic (CAR) make this all the more essential.”

“Sexual abuse by those entrusted to protect a population is particularly egregious, it is our collective responsibility to do our utmost to prevent such behaviour, and ensure that perpetrators are held accountable in all contexts,” Ms. Zerrougui added. 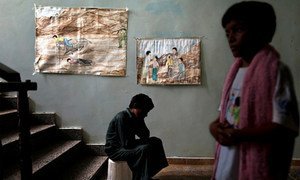 Ensuring that Member States and their military commanders on the ground remain accountable for any violent actions targeting children is key to preventing atrocities against minors affected by armed conflict, the United Nations Special Representative for Children and Armed Conflict, Leila Zerrougui, has affirmed.