United Nations Secretary-General Ban Ki-moon today welcomed the release of Pope Francis’ Papal Encyclical in which the leader of the Catholic Church deplored climate change as one of the principal challenges facing humanity and called for a ‘new dialogue’ about shaping the future of our planet.

“The Secretary-General reaffirms that humanity has a significant obligation to care for and protect our common home, the planet Earth, and to show solidarity with the poorest and most vulnerable members of society who are suffering most from climate impacts,” declared a statement issued earlier today by a UN spokesperson.

“The Secretary-General therefore urges governments to place the global common good above national interests and to adopt an ambitious, universal climate agreement in Paris this year.”

According to the statement, the encyclical’s findings acknowledge the “very solid scientific consensus” showing significant warming of the planet’s climate system and that such warming is “mainly a result of human activity.”

In addition, the Papal declaration describes climate change as a critical moral issue requiring respectful dialogue with all parts of society.

“The Secretary-General welcomes the contributions of all religious leaders and people of influence in responding to the climate challenge and in strengthening sustainable development,” the statement says.

“He looks forward to welcoming Pope Francis at the United Nations in September to address the UN General Assembly,” the statement concludes looking ahead to the Pontiff’s visit to the UN during the high-level opening of the world body’s 70th anniversary session.

Speaking to reporters in New York after the statement was issued, the Secretary-General said that he and Pope Francis agree that climate change is a moral issue that requires collective urgent actions.

“It is an issue of social justice, human rights and fundamental ethics,” continued the UN chief, urging the international community to “do far more to help the poorest and most vulnerable members of society, who are suffering most from climate impacts yet had least to do with causing the problem.”

Mr. Ban deeply thanked Pope Francis for taking such a “strong stand” on the need for urgent global action. His moral voice is part of a growing chorus of people from all faiths and all sectors of society speaking out for climate action. 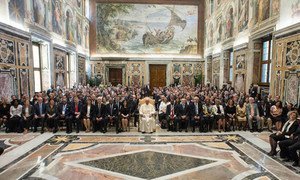 Addressing over a hundred delegates attending a United Nations Food and Agriculture Organization (FAO) conference in Rome, Pope Francis today urged Member States to work toward combatting food waste, reducing the volatility of food prices, and creating a sense of global solidarity to ensure food security for all people.