The stark conditions afflicting millions of displaced Palestinians across the Middle East risk destabilizing the region and plunging it into a deeper humanitarian and security crisis, the head of the United Nations agency assisting Palestinian refugees has warned.

“The isolation, exclusion and dispossession of Palestine refugees in Syria, Gaza, the West Bank, Jordan and Lebanon represent a time-bomb for the Middle East region,” Pierre Krähenbühl, the Commissioner General of the UN Relief and Works Agency for Palestine Refugees (UNRWA), said yesterday at a meeting of the agency’s Advisory Commission of major donors and host governments, held in Amman, Jordan.

Amid an explosive conflict in Syria and ongoing tensions across Gaza and the West Bank, Mr. Krähenbühl told delegates in attendance that more than five million Palestinian refugees currently face “an existential crisis on many fronts,” ultimately resulting in “a denial of dignity and rights that must be addressed.”

The situation afflicting the Palestinians across the Middle East region is, in fact, quite dramatic, according to the latest UN data. Gaza today is home of the highest unemployment in the world, with more than 60 per cent of young people not working.

Meanwhile, some 60,000 Palestine refugees from Syria have fled to Lebanon and Jordan, putting pressure on host communities. From Syria’s Yarmouk and Jordan’s camps to the West Bank, the lives of Palestine refugees are constrained, with poverty and deprivation overflowing in overcrowded camps and the needs of the communities continuing to grow resources.

At the same time, a recent UNRWA situation report from mid-May warned that the vulnerability of civilians in Yarmouk remains of the highest severity. The UN agency has repeatedly voiced its deep concern that without access, the most basic humanitarian needs of up to 18,000 Palestinian and Syrian civilians, including 3,500 children, continue to be left unmet.

Adding to the UNRWA head’s list of concerns was the dire situation facing the agency’s emergency funding which, for the Syria appeal, currently stands at only 27 per cent met. The Gaza reconstruction appeal is similarly underfunded with only $216 million in pledges received out of a total $720 million needed.

“Currently, UNRWA confronts a funding shortfall for core activities – such as schools for half a million children – to cover the year 2015 of USD101 million,” he continued. “UNRWA at present could pay salaries and cover activities only into September.”

Mr. Krähenbühl explained that his agency would organize a special consultation with host governments within the next ten days to exchange further views on the critical situation facing UNRWA’s efforts and the conditions of Palestinian refugees.

UN to host international media encounter on question of Palestine 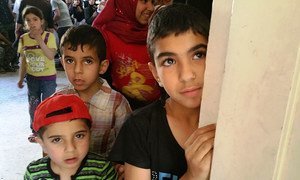 Marking 65 years since the inception of the United Nations Relief and Works Agency for Palestine Refugees in the Near East (UNRWA), Secretary-General Ban Ki-moon today called it more than just an agency but a “lifeline,” as he paid tribute to its staff especially those who have lost their lives trying to serve others.