MONUSCO/Sylvain Liechti
Special intervention brigade forces from Tanzania, part of the UN peacekeeping mission in the Democratic Republic of the Congo - MONUSCO, on duty in Sake, North Kivu (July 2013).
16 June 2015

Focus on political solutions, responsive and flexible operations, stronger partnerships and field-focused and people-centered mandates; these are the essential shifts the United Nations must urgently address as it faces challenging new landscapes in peacekeeping and conflict prevention, the chair of a high-level expert panel said today, introducing a long-awaited report at the world body’s New York Headquarters.

“Primacy of politics means that lasting peace is achieved through political solutions and not through military and technical engagements alone. Political solutions must guide all UN peace operations,” said José Ramos Horta, former President of Timor-Leste and Nobel Laureate at a press briefing where he presented on behalf of the 16-member panel key recommendations and areas where the group agreed reforms should be implemented.

On 31 October 2014, UN Secretary-General Ban Ki-moon announced the establishment of a High-Level Independent Panel on Peace Operations, chaired by Mr. Ramos-Horta. Responsible for making a comprehensive assessment of the state of UN peace operations today and the emerging needs of the future, the panel was also tasked with examining special political missions.

The new survey is being made public 15 years after the release of the groundbreaking Brahimi Report, named after long-time UN adviser and renowned Algerian diplomat Lakhdar Brahimi who chaired a similar high-level panel convened by former UN Secretary-General Kofi Annan.

Earlier today, the new report was handed over to Mr. Ban, who said he would study its findings “carefully” before transmitting it to the UN General Assembly and the Security Council. 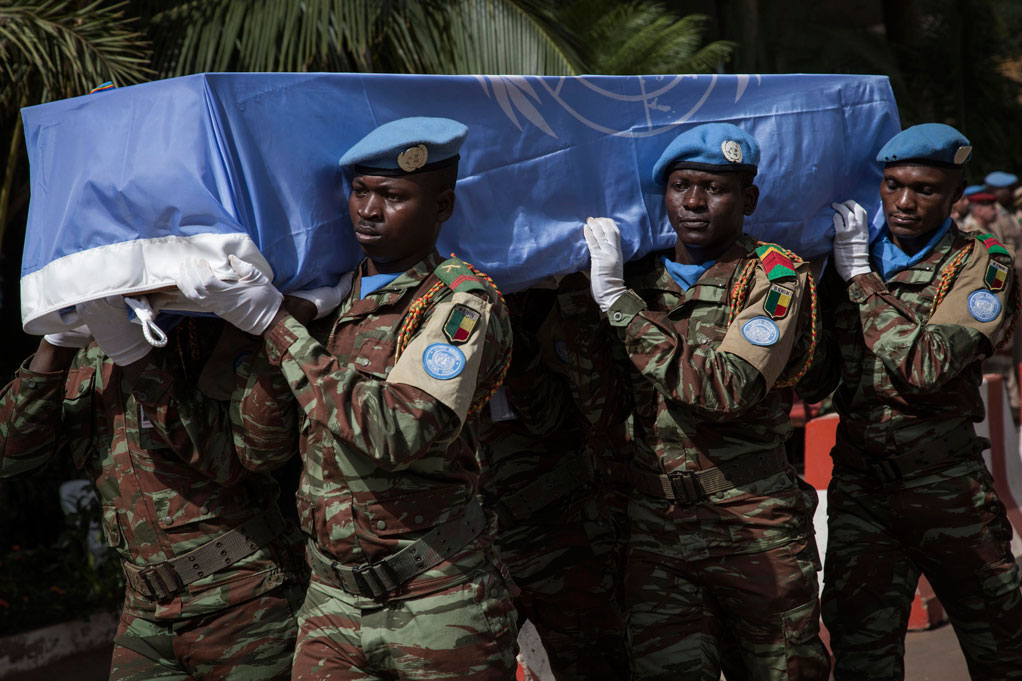 Members of the UN Multidimensional Integrated Stabilization Mission in Mali - MINUSMA - honour a fallen colleague, killed during an attack on 25 May 2015, in Bamako. UN Photo/Marco Dormino 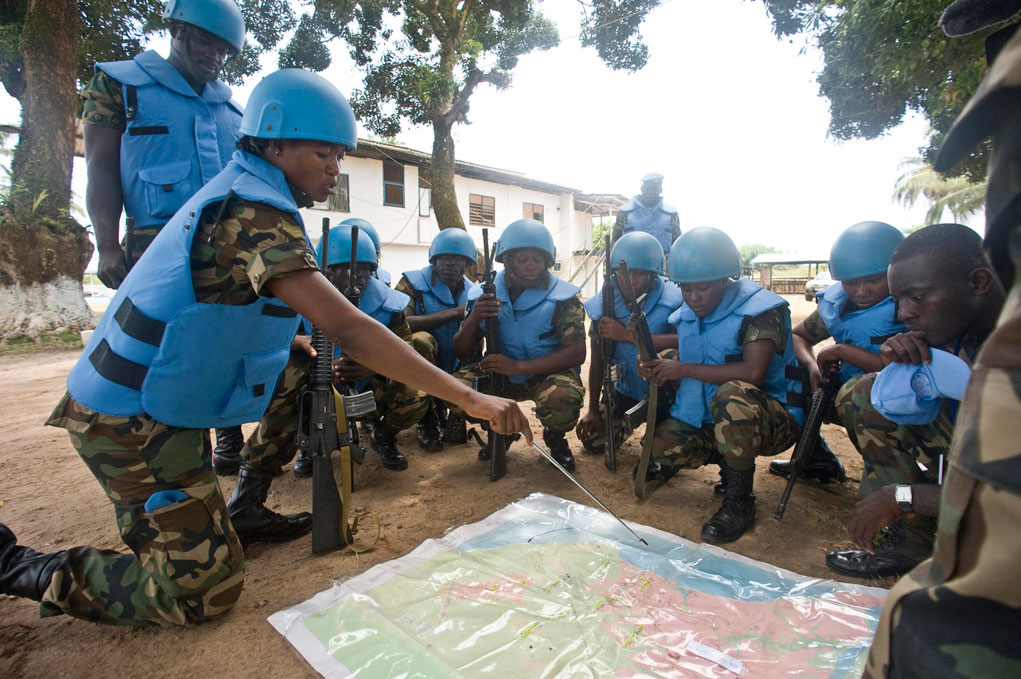 Sergeant Dora Doroye, a female soldier from Ghana serving with the UN Mission in Liberia - UNMIL - leads a mission debrief following a patrol of the city of Buchanan (April 2009). UN Photo/Christopher Herwig 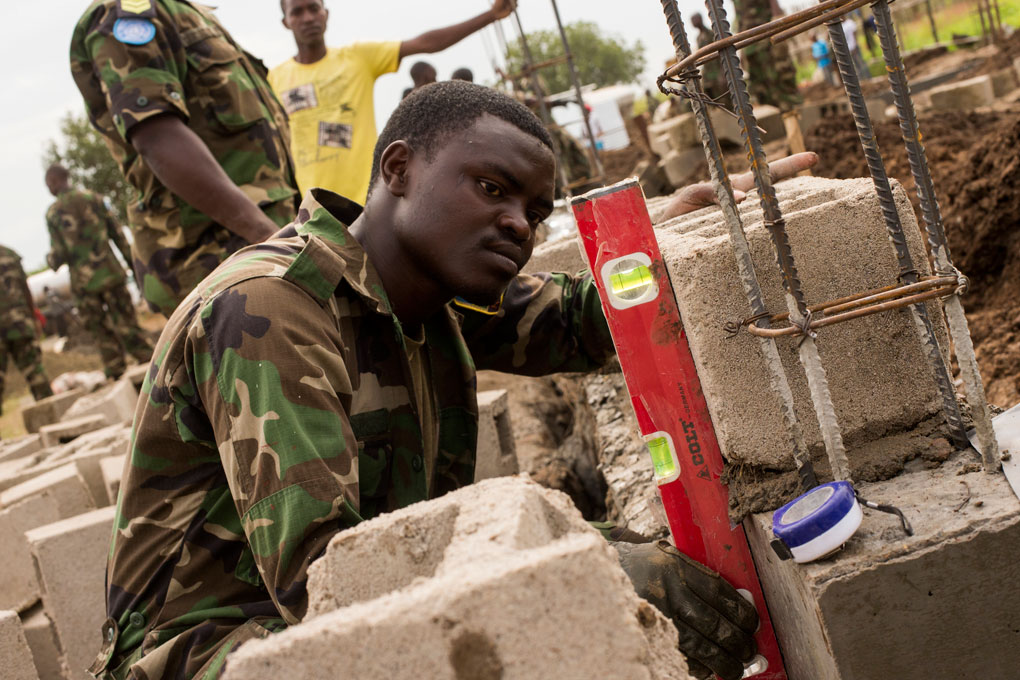 Rwandan peacekeepers with the UN Mission in South Sudan - UNMISS - assist the community of Kapuri in building a new school to improve the learning environment for children (Sept. '14). UN Photo/JC McIlwaine 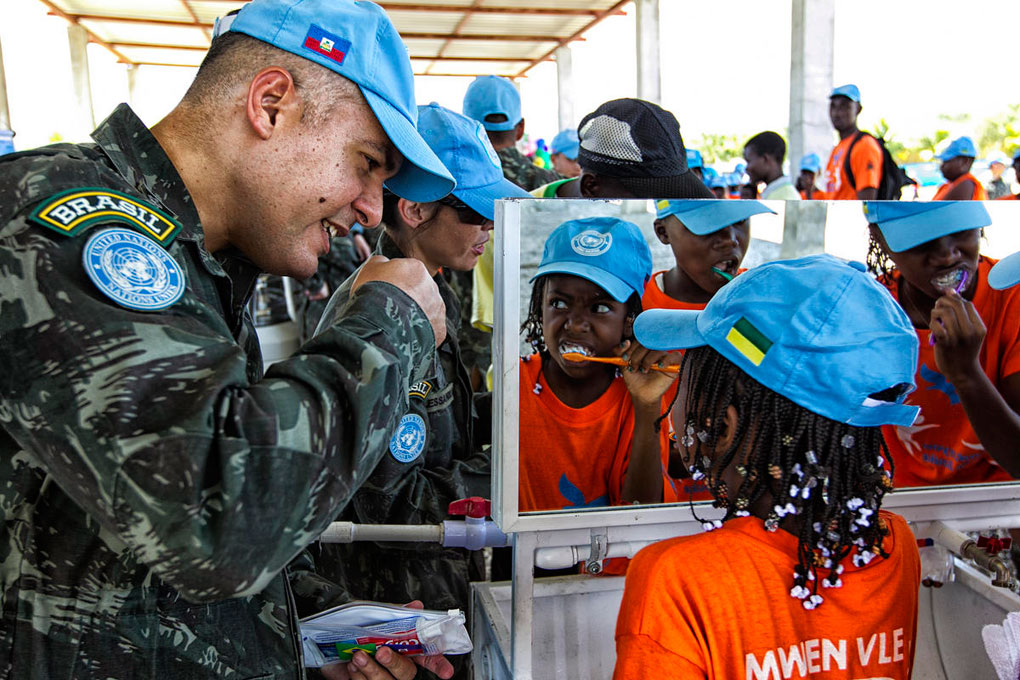 In Haiti, a Brazilian peacekeeper with the UN Mission there - MINUSTAH - shows a young girl how to brush her teeth during a day of sports, cultural and educational activities for children from the slum Cité Soleil. UN Photo/Logan Abassi 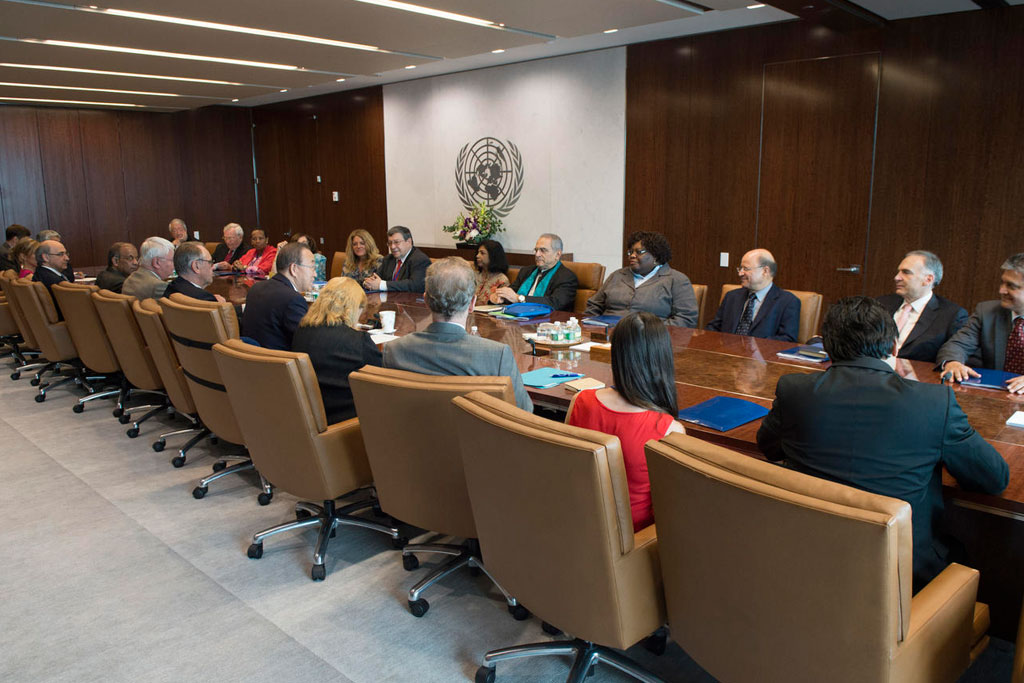 Secretary-General Ban Ki-moon receives the report of the High-Level Independent Panel for the Review of Peace Operations. UN Photo/Eskinder Debebe 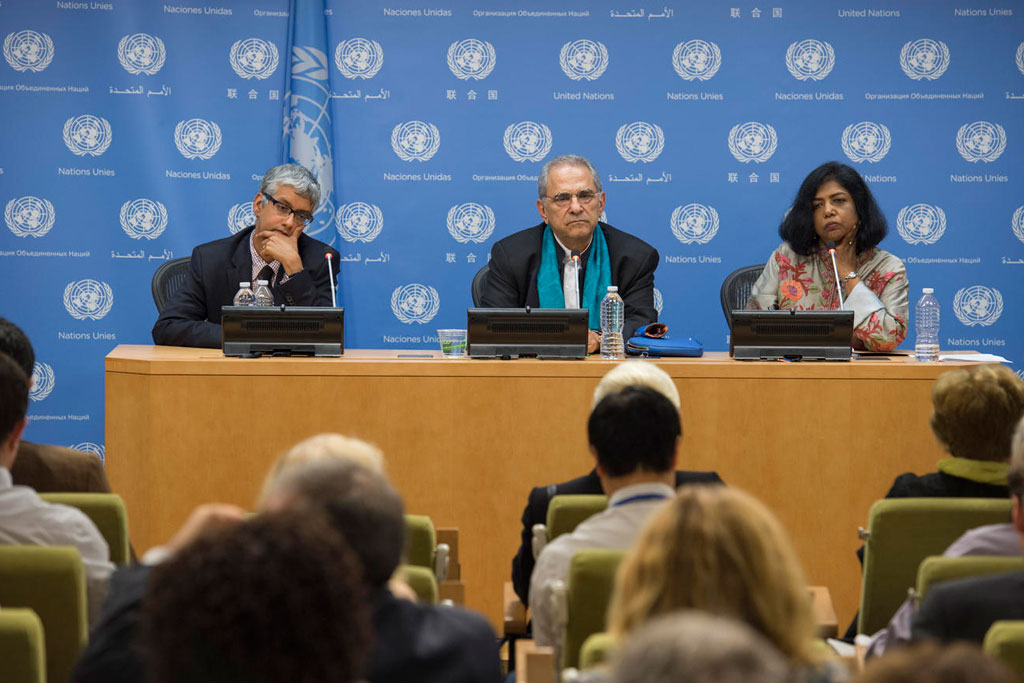 “We will be leading the implementation phase from my Office, with the close participation of all the key departments”, the UN chief stated. “My instruction to them will be to carry on the spirit the Panel employed; to be bold; and to see the task as nothing less than preparing the United Nations to rise to the challenges of the future.”

Speaking on behalf of the Panel with the Vice-Chair, Ameerah Haq, former UN Under-Secretary-General for the Department of Field Support, Mr. Ramos-Horta emphasized the need for UN missions to be “tailored to context,” the UN being encouraged to embrace the term ‘peace operations’ to denote the full spectrum of responses in one articulated sequence, without isolating military components from police and civilian ones.

In addition, a “more resilient global and regional architecture for international peace and security” is required for the future; he said, convinced that the UN Headquarters must lay out a “vision” and focus more on enabling field missions, while personnel should renew “their resolve to serve and protect the people,” with one goal in mind: the well-being of civilians on the ground.

The Panel worked primarily through consultations, thematic workshops, review of submissions and relevant literature, capital visits, and targeted interviews, Mr. Ramos-Horta. Consultations with Member States, civil society and academia were held and the Panel received more than 80 written submissions from more than 50 Member States, regional and other organizations – such as the African Union – UN partner entities, civil society, academia and research outfits.

Calling for a stronger push for prevention, the Panel recommends the establishment of an “international forum on prevention drawing on external resources and knowledge,” as well as an “earlier engagement” by the Security Council to address “emerging threats”.

On rapid deployment, the group was unanimous in recommending the UN to lay out a “vision” and “roadmap for a stronger network of national and regional standby capabilities.”

Taking note of complaints expressed by a number of troop and police contributing countries about the lack of consultations, the Panel has concluded that such consultations should be institutionalized “to forge a common purpose for missions from the outset,” the Chair continued.

Among other recommendations, the report says the UN Secretariat should consider the establishment of a position of an “additional Deputy Secretary-General responsible for peace and security”, as well as a proposal for a single ‘peace operations account’ to finance all missions and related back-stopping activities in future. 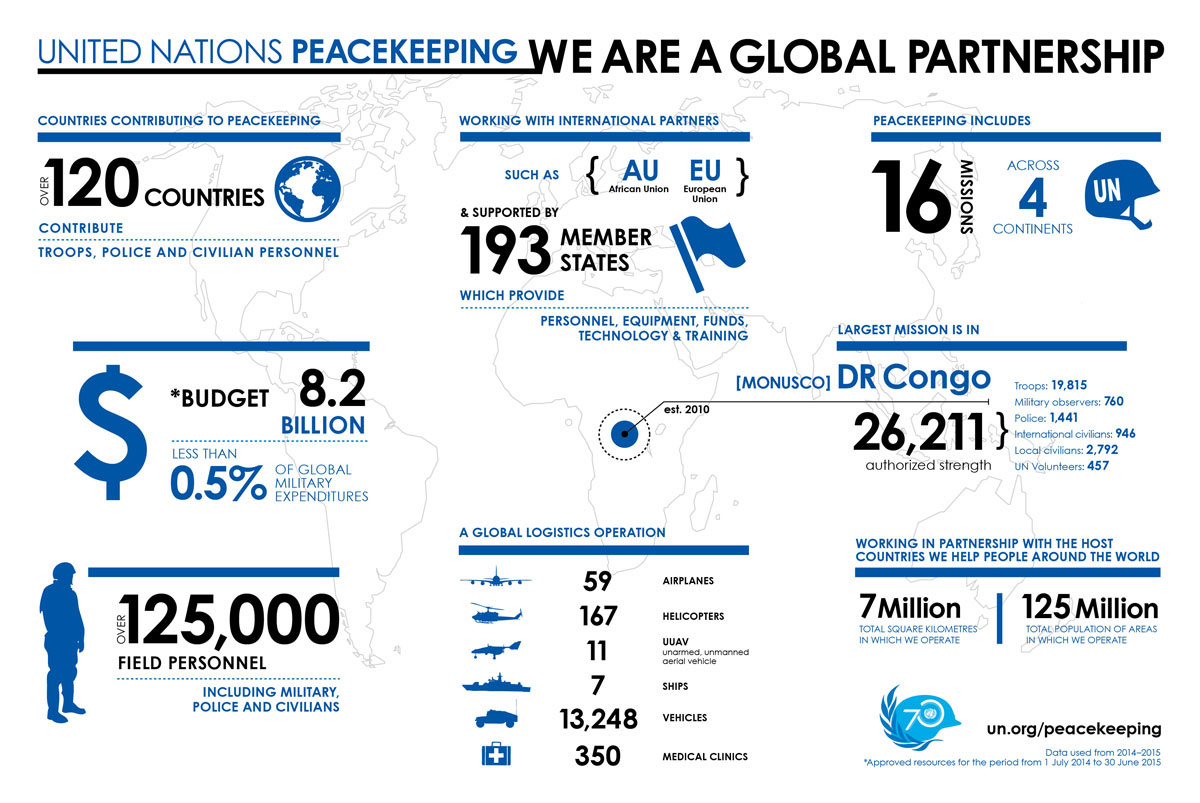 ♦ Receive daily updates directly in your inbox - Subscribe here to a topic.
♦ Download the UN News app for your iOS or Android devices.
UN70|peacekeeping

The world is changing and United Nations peace operations must change with it if they are to remain an indispensable and effective tool in promoting international peace and security, Secretary-General Ban Ki-moon said today, announcing a new blue ribbon panel to assess the current and future needs of the Organization’s peacekeeping architecture.