To tackle the humanitarian impact of the “relentlessly deteriorating” crisis in South Sudan, the European Union and the United Nations today announced that more than $275 million has been pledged in support of the victims in the country and the wider region.

The pledges were made during a high-level conference in Geneva organised by the European Union (EU) and the UN Office for the Coordination of Humanitarian Affairs (OCHA) on the humanitarian situation in the world’s youngest country.

According to OCHA, the humanitarian crisis in South Sudan has deteriorated relentlessly since violence broke out at the end of 2013. More than 2 million people have been internally displaced and are vulnerable to attack, gender-based violence and forced recruitment to armed groups. An estimated 4.6 million people are facing severe food insecurity and the start of the rainy season is increasing people’s risk of water-borne diseases and malaria.

“We must fund the aid effort adequately and enable humanitarian workers to provide basic services – food, water, shelter and healthcare – to people in the most difficult-to-reach locations,” said UN Under-Secretary-General for Humanitarian Affairs Stephen O’Brien. “It is vital to send a message of solidarity and hope to South Sudan.”

The conflict has triggered the flight of more than half a million refugees into neighbouring Ethiopia, Kenya, Sudan and Uganda. More than 17,000 children have crossed borders, being separated from their families.

In remarks ahead of the event, Mr. O’Brien, who is also the UN Emergency Relief Coordinator, said that over the past month, the fighting has intensified [in the country] and there have been “completely unacceptable” attacks on UN bases where more than 140,000 people are sheltering.

Moreover, he said that eyewitness accounts and satellite images show that the parties to the conflict are “destroying” communities in parts of Greater Upper Nile state, he reported. Civilians have been terrorized and forced to flee for their lives. Villages have been razed; health facilities have been destroyed; livestock has been stolen; food has been taken and burned.

“We now have more new South Sudanese refugees than when the Comprehensive Peace Agreement was signed after decades of civil war,” said UN High Commissioner for Refugees António Guterres.

“The neighbouring countries are severely impacted by this massive outflow, and humanitarian agencies lack the resources to address the enormous and growing needs. With a refugee population that is comprised of 70 per cent children, there is an even more urgent need to step up funding and address the most basic requirements for their protection,” he explained.

For his part, EU Commissioner for Humanitarian Aid and Crisis Management, Christos Stylianides said the pledges at today’s conference show that the world has not forgotten the people of South Sudan. We are committed to alleviating their suffering.

“I witnessed this unfolding disaster first-hand just a few weeks ago. I also saw the admirable work done by humanitarian workers,” he said, adding: “Our first priority is to save lives; but this is a man-made crisis which cannot be solved by humanitarian aid alone. A political solution is urgently needed. I call on those fighting to stop the plight imposed on their people and give full protection and access to humanitarian workers.” 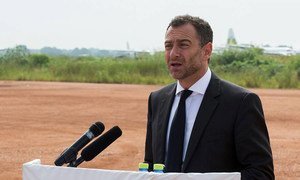