UNICEF/Giacomo Pirozzi
Girls play in the schoolyard at Santo Niño Elementary School in the town of Tanauan, Philippines.
16 June 2015

Although the empowerment of women has been among the most significant achievements of the past century, the international community must “push further” in its struggle to ensure the right to education for all girls, the top UN human rights official declared today.

“Investing in girls’ education is not only the right thing to do, it is also the smart thing to do,” Zeid Ra’ad Al Hussein, the UN High Commissioner for Human Rights, said as he addressed a panel discussion on realizing the equal enjoyment of the right to education by every girl held at the UN Office at Geneva, Switzerland.

“As education expands girls’ horizons, opens up better earning opportunities, and improves women’s position in the family and society, it brings strong benefits to the entire community,” Mr. Zeid continued, noting that the benefits included “greater social stability, better health outcomes across generations, and a surge of economic growth.”

He explained that, according to a recent UN-backed Statistics on Women study of 174 Member States, the best predictor of a country’s so-called “peacefulness” is not its wealth or political structure but the well-being and education of women and girls. This finding, coupled with the considerable progress made towards achieving the third Millennium Development Goal (MDG) on gender equality marked “a tremendous force for social change,” according to Mr. Zeid.

At the same time, he warned, almost one-third of countries today continue to lag in achieving gender parity in primary education while less than half see as many girls as boys in lower-secondary grades.

“In several countries, education is far from being a zone of gender-sensitivity and safety; a shocking number of girls face sexual violence and harassment inside schools, and on their way to schools,” added the High Commissioner. “One-third of girls in developing countries are married before they’re 18, and millions give birth while they are still in their teens; most of these young women are prevented from continuing their education.”

Gender parity in education is also under threat from the growing spread of extremists who seek to extinguish any attempt at changing their obscurantist views. A recent paper issued by the UN human rights office (OHCHR) covering the years spanning 2009 to 2014 reported thousands of attacks against schools in at least 70 different countries, many of which were targeted for advocating girls’ education.

The violence, Mr. Zeid said, ultimately stemmed from a fear of the power of girls’ education “to spark and sustain social, cultural, economic and political change.”

“Every State should take urgent measures to ensure that all girls can effectively and safely access education of quality, including teaching about human rights,” concluded the High Commissioner. “With an education of this nature, in line with human rights standards, future generations will be equipped to build and maintain societies based on equality and justice for all.” 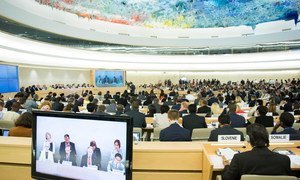 While 70 years of work by the United Nations has helped build a formidable system of rights protections, the nagging persistence of “everything else” – wars and ongoing deprivation – is deeply worrying, the top UN human rights official declared today, urging renewed action to promote economic and social rights for all and tackle pervasive discrimination and repression.