While 70 years of work by the United Nations has helped build a formidable system of rights protections, the nagging persistence of “everything else” – wars and ongoing deprivation – is deeply worrying, the top UN human rights official declared today, urging renewed action to promote economic and social rights for all and tackle pervasive discrimination and repression.

“Simply put, too many of us live among brutal conflicts, and are threatened by greed, ambition and contempt for human life,” Zeid Ra’ad Al Hussein, the UN High Commissioner for Human Rights stressed in his opening remarks to the 29th session of the Geneva-based Human Rights Council.

Decrying “unmistakeable signs of growing abandonment, of a headlong retreat, by too many States,” Mr. Zeid said too many people are still being denied their economic and social rights, and the result is suffering on a colossal scale. “Discrimination so severe and pervasive still, that it deprives too many people of the means of existence. Repression that stifles the human voice, and breaks the spirit, is also still too evident.”

Outlining the need to always be sensitive and act sensitively wherever rights have been violated, M. Al Hussein reminded that, in recent weeks, “there has been much criticism of the UN made by a number of observers, and specifically of my Office and its leadership, in respect of how we handled allegations of appalling child abuse in the Central African Republic (CAR) last year.”

The conduct which drew the criticisms deserves judgement, he added, expressing support for the Secretary-General’s decision to establish an external review. “I will accept the result, and abide by its findings, of course, whether they relate to my Office or my own conduct in this matter,” he stated.

On June 3rd, the Secretary-General had announced his intention to establish an independent panel to investigate the United Nations’ handling of sexual abuse allegations involving foreign troops in the CAR.

Reminding to Member States that they must show leadership too, the UN High Commissioner rejected the idea that, “in this chamber,” he should not “name and shame,” asserting that “the greatest factory of shame is the blanket denial of human rights.”

Saying that the conflict in Syria is the “most mind-numbing humanitarian crisis of our era”, and “a defining test of what we so often term the international community,” Mr. Zeid equally condemned “more than four years of a sustained campaign of terror directed by the Government against its own people, and the rise of non-State actors capable of the most appalling horror.”

“It has forced the largest movement of people since the Second World War, with well over 7 million people displaced within the country and 4 million fleeing it,” he underscored, expressing his growing concern towards the situation of migrants, many coming from Syria.

Hoping that the consultations between the Secretary-General’s Special Envoy, Staffan de Mistura, with Syrian, regional and international actors, will “pave the way for peace,” he stressed that any agreement should be focused on the human rights of all the Syrian people, and the need to repair the fissures between ethnic and religious communities.

In addition to the situation in neighbouring Iraq, where the Islamic State in Iraq and the Levant (ISIL) continues to perpetrate the most “despicable abuses,” Zeid talked about Libya, where armed groups continue to engage in violent clashes using heavy weaponry, and indiscriminate shelling of residential neighbourhoods.

In his wide-ranging address, the High Commissioner also noted the human rights situations in a number of countries, including, among others, Libya, Yemen, Somalia, Nigeria, Mali, Egypt, Azerbaijan, Burundi, Russia, South Sudan, and Venezuela, as well as the persecution of the Rohingya community in Myanmar and the impact of Boko Haram activities in Northeast Nigeria and neighbouring countries bordering Lake Chad. He also expressed concern about the situation in the Occupied Palestinian Territory.

Considering that the current context recalls the world’s situation at the turn of the 20th century, the UN rights Chief said 2015 is a year of “vast opportunity for development,” with the pivotal Financing for Development Conference to be held in July in Addis Ababa and a summit on the post-2015 development agenda in September in New York.

“The integration of human rights in that agenda can become a turning point. Sustainable development is about freedom from fear and freedom from want for all,” he concluded. 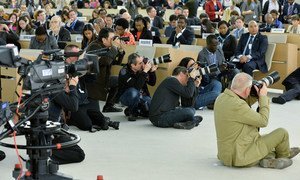 The United Nations has the mandates and tools it needs to prevent human rights violations, Secretary-General Ban Ki-moon told delegations gathered in Geneva today for the opening of the current session of the world body’s Human Rights Council, while he warned that the biggest challenge to using these tools is lack of political consensus among Member States.