The distressing crime of elder abuse often occurs in quiet, private settings, United Nations Secretary-General Ban Ki-moon said today on World Elder Abuse Awareness Day, as he reminded people around the world of the importance of making “a vocal, public response” to support the rights of older persons to a life free of violence and abuse.

“It is a disturbing and tragic fact in our world that members of the older generations are too often neglected and abused,” the UN chief said in a message. “This painful reality generally goes ignored by mainstream society.”

“At the same time,” Mr. Ban said, “the ageing of the world's population has added urgency to promoting and defending the rights of older persons, who are expected to make up more than 20 per cent of the global population by 2050.”

In terms of numbers, that translates into the population of people aged 60 years and older more than doubling from 542 million in 1995 to about 1.2 billion in 2025, according to the World Health Organization (WHO).

Resolved to shed light on this injustice, the UN General Assembly designated 15 June as World Elder Abuse Awareness Day. The annual commemoration has helped to generate an emerging global discussion of a once-taboo issue as people come together to support the rights of older persons to a life free of violence and abuse.

Events marking the world day are scheduled around the world, including a commemoration in New York entitled Elder abuse vs. violence against older persons: what are the differences and what are the solutions?, and another in Geneva, Switzerland titled: Falling between the Cracks: Abuse and violence against Older Women Marking World Elder Abuse Awareness Day.

Mr. Ban said that for many, elder abuse “conjures an image of a heartless caregiver who is not well-known to the victim. While this deplorable problem does persist, more often it is family members who perpetrate the violations, which include neglect as well as psychological, financial and physical abuse.”

“Research shows that age, gender and dependency raise the risks of abuses, with women suffering the heaviest toll,” he added.

“The distressing crime of elder abuse often occurs in quiet, private settings, making a vocal, public response that much more important,” the Secretary-General concluded. “Let us strengthen our resolve to end this problem as part of our broader efforts to create a life of dignity for all.”

♦ Receive daily updates directly in your inbox - Subscribe here to a topic.
♦ Download the UN News app for your iOS or Android devices.
older 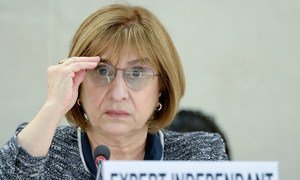 While Efforts have been made in Mauritius to ensure that older persons fully enjoy their rights, the United Nations rights expert on the issue stressed today that “law is not enough” and encouraged the authorities to make detection of elder abuse and law enforcement a priority.