The first-ever day for International Albinism Awareness is an opportunity to celebrate the achievements of people with albinism and join the struggle against the difficulties they face, senior United Nations officials said.

Due to a recessive gene that is carried by both parents, babies in every society are born with albinism. Across the world, these children are likely to face bullying, prejudice and even violence because of stereotypes based on their colouring. Additionally, the common lack of melanin pigment in hair, skin and eyes causes their vulnerability to sun exposure, which can lead to skin cancer and severe visual impairment.

“They frequently cannot access adequate healthcare,” UN High Commissioner for Human Rights Zeid Ra'ad Al Hussein said in a statement commemorating the Day. “Failure to accommodate this visual impairment, as well as mockery and abuse, may force them to drop out of school; compounded by widespread social rejection, this can result in unemployment, isolation and life-long poverty.

In some parts of the world, people with albinism may also suffer horrific, and even lethal, atrocities.

The High Commissioner elaborated, “civil society activists have reported that hundreds of people with albinism – a majority of them children – have been killed, mutilated or otherwise attacked in at least 25 African countries, because of the belief that their body parts confer magical powers. More cases remain undocumented because of the isolation of the victims, the secrecy surrounding ritual practices, and indifference. Shockingly, such crimes have seldom been investigated or prosecuted.”

Recently, discrimination and violence against individuals with albinism have been highlighted by the Geneva-based UN Human Rights Council and the African Commission on Human and Peoples' Rights, as well as by the High Commissioner's Office (OHCHR).

“In coming weeks, a UN Independent Expert will be appointed to give an international voice to the concerns of people with albinism, and to contribute to protecting their rights,” said the top UN human rights official.

In Tanzania and Malawi, efforts are underway to develop nation-wide strategies to combat the violence and discrimination that they suffer. Meanwhile, civil society activists around the world continue their essential and inspiring work to fight stigma, combat harmful superstition and ensure that victims have access to justice, care and redress.

“There is no room in this 21st century for erroneous and harmful beliefs, or for discrimination on any grounds. People with albinism are just as deserving of dignity as every other human being. They have the right to live free from discrimination, deprivation and fear,” Mr. Zeid underscored.

“Awareness is the groundwork for action, and this first International Albinism Awareness Day is a beacon of hope for people with albinism everywhere,” the High Commissioner concluded.

In a separate statement, the UN Secretary-General's Special Representative on Violence against Children, Marta Santos Pais, said the lives of children with albinism are surrounded by marginalization, discrimination, prejudice, superstitions and misconceptions simply because of their genetic condition and because they look different. Discrimination condemns these children to a position of extreme vulnerability, and to tolerance of violence against them in many countries in the world.

“The serious violations of the rights of children with albinism to survival and development, to protection from discrimination and to freedom from violence remain a priority concern for my mandate” said Ms. Santos Pais.

She stressed that the International Awareness Day is a unique opportunity to promote laws and policies to better protect children with albinism from all forms of violence and to overcome social conventions that lead to stigmatization and to the extreme social and structural discrimination. 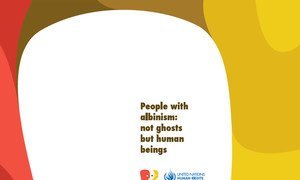 The Office of the United Nations High Commissioner for Human Rights (OHCHR) launched today a website dedicated to the issue of albinism aimed at debunking the myths of the rare condition which is “still profoundly misunderstood, socially and medically.”