OCHA/Michelle Delaney
A mother and her children stand in their small hut in a camp for displaced people in Rakhine State.
12 June 2015

According to the UN’s Office for the Coordination of Humanitarian Affairs (OCHA), over 416,000 people remain in need of relief, including almost 140,000 displaced people living in dire conditions in camps and many others without citizenship in isolated villages.

To that point, OCHA confirmed that up to 40,000 of the displaced people in Rakhine state live in camps within 500 metres of the coastline, leaving them vulnerable to the elements amid an imminent monsoon season.

The UN body added that access to adequate healthcare and livelihoods remained a major concern for displaced people and vulnerable communities across Rakhine state while restrictions on the freedom of movement of hundreds of thousands of people had severely compromised their basic rights to food, healthcare, education, livelihoods and other basic services, leaving them dependent on humanitarian aid.

The tensions in Rakhine state have contributed to a growing exodus of ethnic Rohingya who have been risking their lives by crossing the Bay of Bengal and the Andaman Sea for nearby states.

The UN refugee agency recently reported that more than 1,000 new Rohingya arrivals have been registered in Indonesia, which has distributed relief supplies and are counselling dozens of new arrivals in southern Thailand, and in Malaysia the refugee agency is scaling up to meet the needs of arrivals. 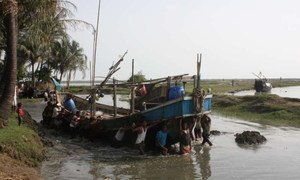 The United Nations refugee agency today announced that it is seeking $13 million to help with the needs of new boat arrivals to countries in Southeast Asia, where thousands of refugees and migrants from Myanmar and Bangladesh have been risking their lives by crossing the Bay of Bengal and the Andaman Sea.