UNHCR/I. Charnetski
In January 2015, Nyachot displays a handful of maize grains that form part of the food ration she receives in Kakuma Refugee Camp, Kenya, where she lives with her four children.
12 June 2015

The United Nations World Food Programme (WFP) has announced that starting next Monday, half a million refugees in two sprawling refugee camps in Kenya will receive 30 per cent less food due to shortage of funds for relief operations.

WFP said it is temporarily reducing the size of rations at the Dadaab and Kakuma camps in northern Kenya as the only way to make its supplies last longer. The agency says that the ration cuts could continue at least through September, unless new funds become available very quickly.

This is the second time in just over six months a shortage of funds is forcing WFP to reduce the size of food rations for refugees living in the camps – most of whom come from Somalia and South Sudan.

“We are very worried about how this cut may affect the people who rely on our assistance,” said Thomas Hansson, WFP’s Acting Country Director for Kenya.

“But our food stocks are running out, and reducing the size of rations is the only way to stretch our supplies to last longer. We hope that this is only a temporary measure and we continue to appeal to the international community to assist.”

The agency said it is currently struggling to raise $39.4 million to cover shortfalls through January next year, of which $12.4 million is urgently required to avoid a critical food gap in August and September.

WFP distributes 9,300 metric tons of food for 500,000 refugees each month at a cost of $9.6 million in the camps. Every two weeks, refugees collect a general food ration of cereals, pulses, vegetable oil, salt, and nutrient-enriched flour made from soya and maize. Together, these provide 2,100 kilocalories per person per day, the recommended minimum energy intake.

Starting on 15 June, the refugees’ daily food ration will contain a smaller quantity of cereals, and will provide only 1,520 kilocalories per day, a 30 percent decrease in their daily intake.

WFP’s food stocks for refugees are dwindling, and although a substantial contribution of food is expected to arrive in time to meet part of the needs for October, it is possible that deeper cuts may be necessary in the coming months if no new resources arrive.

If there is an immediate response from donors, however, WFP would be able to buy food available in the region and quickly transport it to the camps to reduce the impact of the cuts on refugees.

Last year in November, WFP said it was forced to cut rations by half but new funding helped to reduce the size of the cut and eventually resume distribution of full rations. 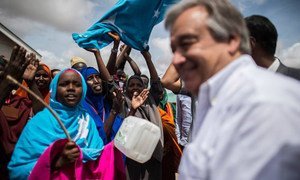 The United Nations refugee chief has completed a visit to Kenya and Somalia where he held successful meetings with the Presidents of both countries and discussed issues related to refugees and returnees, particularly regarding the hundreds of thousands of people in Dadaab camp.