The Central Africa region is still facing many challenges, including an economic crisis aggravated by the drop in oil prices, rising youth unemployment, and terrorist activities, as well as the cross-border impact of crises in Central African Republic (CAR) and Burundi, the Special Representative of the United Nations Secretary-General for the sub-region warned today.

“The crisis in the CAR continued to have regional and multidimensional consequences with almost half a million refugees; ongoing gross violations of human rights; growing gang-related criminality; and environmental degradation in refugee areas,” Abdoulaye Bathily said, briefing the Security Council about the situation for the first time since November 2014.

In a Presidential Statement adopted during the same meeting, the Council echoed Mr. Bathily’s concerns, while welcoming the holding of the Bangui Forum for National Reconciliation from May 4 to11, which ended “with the signing of a number of key documents, including a Republican pact for peace, national reconciliation and reconstruction, as well as with an agreement on disarmament, demobilization and reintegration (DDR).

In the Lake Chad Basin, “the dire humanitarian situation, resulting from attacks perpetrated by Boko Haram, continued to affect the population, including in Cameroon and Chad”, stressed Mr. Bathily, who also heads the UN Regional Office for Central Africa (UNOCA).

The Security Council Presidential Statement condemned the increase in attacks perpetrated by the terrorist group and expresses concern that its activities continue to have adverse humanitarian impact: along with the displacement of an estimated 74,000 Nigerians into neighbouring Cameroon, there are 96,000 internally displaced persons (IDPs) within Cameroon, and in Chad almost 20,000 Nigerian refugees, 8,500 returnees and 14,500 IDPs.

“Recent attacks by the terrorist group highlight the need for the affected States to remain vigilant and engaged”, the Special Representative warned.

Further, over the past six months, the Lord’s Resistance Army (LRA) also continued to pose a threat to regional security, particularly in CAR and the Democratic Republic of the Congo, noted UNOCA chief. In spite of ongoing efforts, the number of civilians abductions unfortunately increased, he said, adding that more than 200,000 persons still remain displaced across the region.

Nonetheless, the surrender of senior LRA commander Dominic Ongwen in January 2015, and his subsequent transfer to the International Criminal Court, marks a significant step forward with regard to criminal justice, stated Mr. Bathily. “Ongwen’s removal from the battlefield sends a strong message to remaining LRA fighters and signifies that international efforts to combat the group are bearing fruit.”

UNOCA, as well as UN political and peacekeeping missions in the region, were urged by the Council to enhance these efforts in support of the implementation of the United Nations Regional Strategy to Address the Threat and Impact of the Activities of the LRA.

In coordination with the UN Office for West Africa (UNOWA), UNOCA also continued working to consolidate their activities in combatting maritime insecurity in the Gulf of Guinea, the Special Representative assured, as well as working on a sub-regional strategy to tackle the growing phenomenon of poaching in central Africa. 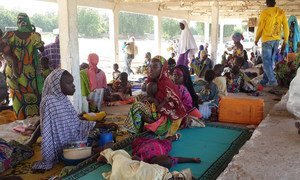 The senior United Nations envoy in Central Africa today welcomed Chad’s decision to send soldiers to Cameroon to help in the fight against Boko Haram, on the heels of several assaults on cross-border villages in northern Cameroon, which have raised fears that the insurgents are expanding their attacks.