UNICEF Sierra Leone/Mason
Since the Ebola outbreak in Sierra Leone, UNICEF and partners have been working to deliver essential food and non-food items to quarantined families across the country.
11 June 2015

The number of Ebola cases in West Africa has increased for the second straight week, with the number of cases that arose from unknown sources of infection highlighting the challenges still faced in finding and eliminating every chain of transmission, according to the World Health Organization (WHO).

And the UN Mission for Ebola Emergency Response (UNMEER) reported today that “five new Ebola cases were confirmed in Sierra Leone on 8 June, the highest number in a single day for many weeks.”

The UN mission also drew attention to the latest progress report in the response to the Ebola outbreak at the 210-day mark since the establishment of UNMEER, which warned that “the outbreak is not over and the response efforts must be sustained until we get to zero cases throughout the region and are able to stay at zero for several months.”

In his report, UN Secretary-General Ban Ki-moon wrote that “the International Ebola Recovery Conference that I will convene on 10 July 2015 will be an opportunity for the international community to demonstrate its continued shared commitment to the affected countries to get to zero and to stay there.”

In the latest Ebola update, WHO reported that “in recent weeks, the decline in case incidence and the contraction of the geographic area affected by Ebola virus disease (EVD) transmission that was apparent throughout April and early May has stalled.”

The update said 31 confirmed Ebola cases were reported in the week ending 7 June: 16 cases in Guinea and 15 in Sierra Leone, making it “the second consecutive weekly increase in case incidence, and the highest weekly total number of cases reported from Sierra Leone since late March.”

“In addition,” it said, “cases were reported from a widening geographical area in Guinea and Sierra Leone, and the continued occurrence of cases that arise from unknown sources of infection highlights the challenges still faced in finding and eliminating every chain of transmission.”

WHO again noted the importance of “improved communication with local communities” as “essential to understand and address any concerns that prevent cases and deaths from being reported, and chains of transmission from being detected.”

To date, the Ebola outbreak has affected more than 25,000 people, mostly in Guinea, Liberia and Sierra Leone, with more than 11,000 deaths. 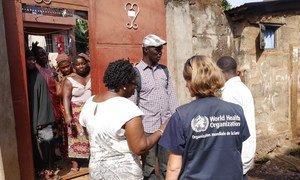 The United Nations World Health Organization (WHO) today reported an increase in the intensity and geographic area of Ebola transmission in Guinea and Sierra Leone, warned that the onset of the rainy season “from now onwards” will make field operations more difficult and noted that community engagement remains a challenge in both countries.