UN Photo/Jean-Marc Ferré
Special Envoy for Syria Staffan de Mistura (second from left) and his team during a meeting on the Geneva Consultations on Syria.

10 June 2015
The United Nations Special Envoy for Syria is continuing a series of critical meetings with Syrian and international stakeholders as part of the ongoing Geneva Consultations and in an effort to find a political solution to the country’s five-year long conflict.

According to a spokesperson for the Organization, Staffan de Mistura – who has been engaged since 5 May with representatives of the Syrian Government, the Syrian opposition Coalition and 39 Syrian political and civil society groups – will continue the consultation process into the month of July with the “sincere hope and belief that guns will fall silent one day.”

“The sooner they fall silent, the more lives will be saved,” Mr. de Mistura’s spokesperson added in a statement issued earlier today. “It is the responsibility of all Syrian, regional and international actors to try to bring that day forward and to make every effort to protect civilians under any circumstances and at all times.”

In addition, the repeated use of highly lethal weaponry, such as barrel bombs, has increasingly drawn condemnation from the Special Envoy and the UN itself.

In the statement, the spokesperson said Mr. de Mistura stressed the existence of a “general consensus” that there cannot be a military solution to the Syrian tragedy and that the continued use of force “will only create further suffering, destruction and grievances.”

“An inclusive and Syrian-led and owned political solution is urgently needed,” the statement added. “Only such a solution can address the aspirations of the Syrian people and end the conflict in a sustainable manner.”

The UN describes the Geneva Consultations as “a rolling process of separate and informal meetings” aimed at operationalizing the Geneva Communique of 30 June 2012 and Mr. de Mistura has announced that he remains set on briefing Secretary-General Ban Ki-moon on his findings from the process.

“Special Envoy de Mistura hopes to be in a position to present to the Secretary-General views on ways to help the Syrian parties reach a political solution, as per the Geneva Communique, to end the unacceptable bloodletting in their country, which has led to countless deaths and injuries, and destruction of cities, towns and villages,” the statement concluded. 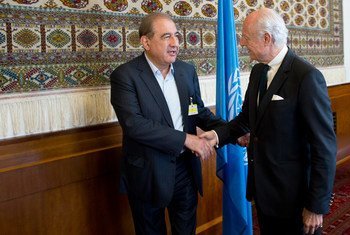 18 May 2015
The United Nations Special Envoy for Syria has continued to meet with Syrian, regional and international interlocutors today in the framework of the Geneva Consultations, according to a spokesperson for the Organization.