“It’s imperative at this critical time we do more to mitigate the suffering of the Iraqi people. Much has been done, but the needs continue to increase and more is needed,” stated Mr. O’Brien, who assumed his post as UN Under-Secretary-General for Humanitarian Affairs and Emergency Relief Coordinator at the beginning of June.

The humanitarian situation in Iraq is dire. Since January 2014, more than three million Iraqis have been displaced from their homes and over eight million people are in need of assistance that aid agencies cannot always provide them with, due to lack of access or because of funding challenges.

On his first mission in his capacity as Emergency Relief Coordinator, Mr. O’Brien yesterday visited Baghdad, where he met people recently displaced from Ramadi. Today, exactly one year after Mosul fell, causing mass displacement, he visited a camp for internally displaced people in Erbil, as well as refugees from Syria.

"All the families I spoke with had heart-breaking stories of fear, flight, loss and grief. International humanitarian law obliges all those engaged in fighting to protect civilians during hostilities, including by refraining from targeting them,” urged the Under Secretary-General.

During his meetings, he discussed progress and challenges in delivering aid with governmental representatives in Baghdad, including the Iraqi President Fuad Masum and Foreign Minister Ibrahim Al Jafaari, among other senior officials. In Erbil, he held similar discussions with Kurdistan Regional Government officials, including the Prime Minister Nichirvan Barzani.

“I emphasized the commitment of the United Nations and partners to work closely with the authorities in the delivery of humanitarian assistance. We are committed to meet the most urgent needs, wherever they arise,” noted Stephen O’Brien. As fighting continues, he expressed fear that the humanitarian situation will further deteriorate, encouraging the Government “to continue the generosity displayed so far”, including by ensuring the freedom of movement of all Iraqis fleeing violence.

Despite the very challenging security conditions, the United Nations and partners are delivering essential aid to people who depend on it for survival. However, without urgent and generous contributions from the international community vital supplies and services will have to be cut.

“We urgently need $497 million to provide shelter, food, water and other life-saving services over the coming six months. This is the bare minimum to cover the most basic needs in Iraq. In actuality, the needs are far greater and we wish we could ask for – and receive – the full amount we need,” said Mr. O’Brien.

“It is my job to remind the international community that behind every statistic stands a child, woman or a man. We must not let the people of Iraq down,” he declared.

To this end, just last Thursday, the UN Office for Coordination of Humanitarian Affairs (OCHA) joined international partners and agencies in Belgium to launch the 2015 Iraq Humanitarian Response Plan in response to critical funding shortages as the conflict in Iraq escalates, with the number of people in need of life-saving assistance over the past year having increased by some 400 per cent. 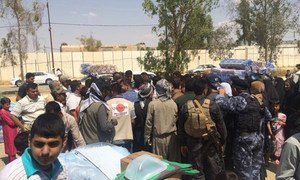 Crisis-torn Iraq, one of the world’s most severe emergencies, is on the verge of collapse because of a lack of funding could force the closure of more than half the relief operations in the country over the coming weeks, the top United Nations humanitarian official there has warned.