IRIN/Naresh Newar
Protestors in Kathmandu gathered ahead of a 27 May 2012 deadline for lawmakers to agree on a new draft constitution for Nepal.
9 June 2015

Secretary-General Ban Ki-moon has welcomed the agreement of a new constitution for Nepal as “a major milestone” in the country's democratic development, a spokesperson for the United Nations confirmed today.

In a statement issued this afternoon, the spokesperson said Mr. Ban applauded the “diligent effort and constructive leadership” demonstrated by Nepal's political leaders in reaching the agreement on 8 June amid the country's wider reconstruction efforts following the devastating earthquakes of April and May.

“The Secretary-General encourages all political leaders to take decisive steps to implement the agreement, work on remaining issues and complete the constitution drafting process through inclusive consultation in the broad interest of the Nepali people,” continued the statement.

“This achievement is particularly laudable as it was reached amid challenging circumstances caused by the major earthquakes of April and May.”

In addition, the UN spokesperson reiterated the Secretary-General's ongoing commitment to Nepal's peace process and its reconstruction while also reaffirming the Organization's continuing support for the country.

Moreover, the UN's Office for the Coordination of Humanitarian Affairs (OCHA) has confirmed that millions of people are in need of humanitarian support while another 1.9 million require food assistance. 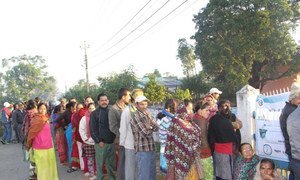 Secretary-General Ban Ki-moon today congratulated the people of Nepal for the peaceful and successful conduct of yesterday’s elections for members of the Constituent Assembly, which is tasked with drafting the country’s new constitution.