Telling stakeholders in Libya’s dialogue that “mothers across [the country] have their eyes on you,” the United Nations envoy for Libya presented draft political proposal and said that the time had finally come for the parties to take the difficult decision to make peace and begin the process towards national reconciliation.

In his address to the meeting, which opened yesterday in Skhirat, Morocco, Bernardino León, the UN Special Representative for Libya, presented a draft of a proposed political agreement, and said he was “full of hope that this draft represents a fair and reasonable way forward that can guide the country’s democratic and political transition until the adoption of a permanent constitution.”

Mr. Leon urged those attending the meeting “to invoke the necessary spirit of flexibility, tolerance and compromise in order to reach a final agreement.”

He told reporters today that “there is a general sense of hope, I would say even optimism that might produce a triple consensus.”

The draft, Mr. León explained, provides a vision of the interim institutional architecture and security arrangements that will underpin the remainder of the transitional period in Libya. It focuses on providing these institutions with the capacity and tools they need to govern effectively while ensuring they remain bound by democratic principles, the separation of powers, and appropriate checks and balances.

“Key in this undertaking will be an agreement amongst you here gathered today on a government of national accord that is representative of all Libyans, and that can start working quickly to assume its responsibilities in addressing the many difficult challenges facing your country, and working towards stabilising and restoring peace to towns and cities across Libya, beginning with its capital, Tripoli,” Mr. Leon said.

Reminding them that “nothing you do today can ever reverse the terrible pain inflicted on the people of Libya,” he said, “today, mothers across Libya have their eyes on you, praying that your words and actions can bring an end to the suffering they have endured for much of the past year […] having to worry on a daily basis about providing enough food for their children, or making sure they have the right medicines to treat them…”

Mr. León went on to tell the delegates and participants: “It is within your hands, and yours alone, to heal the rift that has divided and torn your country apart, to put it firmly back on the path of democracy […] and resume the difficult process of building a modern, civil State based on the rule of law and respect for human rights.”

He also warned them that “recent terrorist and other attacks by these groups from Derna to al-Qubba, from Sirte to Misrata to Tripoli, to Soukna in the south and elsewhere in the country, should serve as a wake-up call regarding the real danger confronting your country.”

“After five months of long and difficult negotiations,” he said, “the time has now finally come for you to make the even more difficult decision to make peace and begin the process towards national reconciliation.”

Mr. León said “no draft is likely ever to meet all the expectations of different parties in the current Libyan context,” but that he was “confident that the current draft goes a long way towards forging a common ground for a fair and reasonable political agreement that is based on consensus, balance and inclusion, and that can pave the way for a resumption of your country’s democratic process.”

“This is not an agreement of winners or losers, but one in which the only true victors are the people of Libya,” he said.

He also assured the participants that “you will have not only the support of all Libyan stakeholders, but also of the United Nations and the wider international community.” 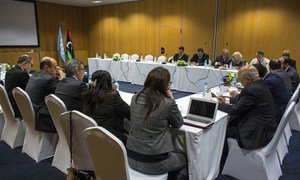 The United Nations Support Mission in Libya (UNSMIL) announced today that the next round of Libyan political dialogue sessions in Skhirat, Morocco, will commence on Monday, 8 June.