Kicking off a high-level event on water in Tajikistan today, United Nations Secretary-General Ban Ki-moon urged nations in the region and beyond to renew their commitment to safe water and sanitation as the international community forges ahead with the post-2015 development agenda and climate change intensifies the need to act.

Kicking off a high-level event on water in Tajikistan today, Secretary-General Ban Ki-moon urged nations in the region and beyond to renew their commitment to safe water and sanitation as the international community forges ahead with the post-2015 development agenda and climate change intensifies the need to act.

“Access to safe drinking water, sanitation and hygiene represent some of the highest development priorities of countries worldwide. These are also important human rights issues,” Mr. Ban said in his opening remarks at the Dushanbe conference.

“Water is life. Water is health. Water is dignity. Water is a human right,” he emphasized.

The water challenge garners most attention at the extremes – in times of drought or flood. But humanity cannot forget that water is essential every day and in almost every way for basic development activities. Bringing people together around a precious resource opens the door to bringing them together around wider issues of peace and security, the UN chief also said.

Today’s meeting takes stock of progress made during the International Decade of Water for Life (2005-2015), initiated by Tajikistan to raise awareness and galvanize action around access to safe water. And over the past ten years much has been achieved, Mr. Ban said. The Millennium Development Goal (MDG) target for safe and sustainable drinking water was realized five years ahead of schedule. In the course of one generation, 2.3 billion people have gained access to drinking water and more than 1.9 billion people gained access to sanitation.

However, some 2.5 billion people lack access to adequate sanitation and another billion still practice open defecation. Nearly 1,000 children under the age of five are killed each day by a toxic mix of unsafe drinking water, poor sanitation and hygiene. And the United Nations estimates that ten years from now, 1.8 billion people will live in areas with absolute water scarcity, and two out of three people around the world could live under water stress conditions.

On a regional level, Mr. Ban said it was crucial to reach consensus over the management of trans-boundary water resources in Central Asia. Further ratification by countries of Central Asia of the water conventions will create a solid framework for this.

Mr. Ban pointed out that the burden of gathering drinking water falls largely on women and girls. They spend 200 million hours every day collecting it. Inadequate sanitation facilities also affect the education, economic productivity, dignity and personal safety of women and girls.

“As we forge ahead with the post-2015 development agenda, it is crucial to involve women in decision making at all levels to ensure access and sustainable management of water and sanitation,” the UN chief emphasized.

Later in the day at a press conference with President Rahmon, the Secretary-General drew attention to his remarks to the ‘Water for Life’ conference and also highlighted, what he referred to as ‘the vital issue of human rights’ and underscored support for the Government’s continued engagement with the UN on human rights mechanisms – particularly to address key human rights challenges.

“Strengthening national coordination mechanisms and implementing UN human rights recommendations holistically and in cooperation with civil society will be important as Tajikistan’s prepares for the second round of the Human Rights Council’s Universal Periodic Review,” he said, adding that adoption of a comprehensive national human rights action plan could streamline these efforts.

In addition, he expressed gratitude for the Government’s support to humanitarian efforts and for hosting the World Humanitarian Summit regional consultations for Central and South Asia in Dushanbe next month. 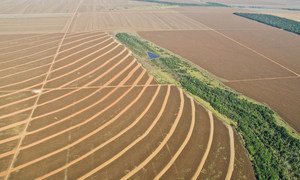