Crisis-torn Iraq, one of the world’s most severe emergencies, is on the verge of collapse because of a lack of funding could force the closure of more than half the relief operations in the country over the coming weeks, the top United Nations humanitarian official there has warned.

This is according to Lisa Grande, the UN Humanitarian Coordinator for Iraq, after the 2015 Iraq Humanitarian Response Plan was launched late last week mid-way through the year in response to critical funding shortages as the conflict in Iraq escalates, with the number of people in need of life-saving assistance over the past year having increased by some 400 per cent.

Today in Baghdad, the new UN Emergency Relief Coordinator and Under-Secretary-General for Humanitarian Affairs (OCHA), Stephen O’Brien, met senior Iraqi Government officials and said that more must be done for all the people in Iraq affected by this devastating conflict.

Mr. O’Brien also met with people from Anbar and Salah al-Din Governorates who remain displaced in Baghdad. Tomorrow, he is expected to visit Erbil, to meet with Kurdistan regional officials and families who have fled the violence.

In an interview, Ms. Grande explained the latest Iraq appeal for nearly $500 million “includes only the bare, literally the bare, minimum requirements” to respond to the urgent humanitarian needs of the more than eight million people in every “single one of Iraq’s 18 provinces,” including some three million internally displaced people (IDPs), and with estimates that 1.7 million more may need life-saving assistance before the end of 2015.

“If funding is not urgently secured, more than half of all humanitarian programmes are likely to close or be curtailed in the coming weeks and months,” Ms. Grande said. “One of the world’s most severe emergencies is on the verge of collapse because of a lack of funding. The implications of this for Iraq, the region, and beyond, are enormous.”

The coordinator also outlined the top priorities in Iraq.

“Protection,” she said, “Helping to protect the most vulnerable people is one of our highest priorities.”

“Iraqis are the victims of some of the most horrible violence anywhere in the world,” she explained, drawing attention to women who are “enslaved and abused. Children are used as human shields and suicide bombers and are crucified. Populations are subjected to mass executions, torture and systematic rape. An estimated 2.3 million people are living in ISIL (Islamic State of Iraq and the Levant)-controlled areas, subjected to conditions which have been condemned throughout the world.”

“We give special attention to the protection needs of the most vulnerable, including women, girls, boys, the elderly, disabled, and survivors of torture and sexual violence in conflict,” she added.

In addition, she said half of all displaced families need urgent shelter support, food insecurity is a key challenge, with 4.4 million people now requiring food aid, and finally, with almost 3 million children out of school, emergency education is a priority.

“A generation of children is at enormous risk, potentially fuelling tensions and violence for decades,” she said. 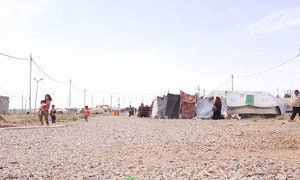 Critical aid operations supporting millions of people affected by the conflict in Iraq are at risk of shutting down unless funds are made available immediately, the United Nations official overseeing relief operations in the country warned today as she joined an international appeal for nearly $500 million to cover the immediate needs of 5.6 million Iraqis for the next six months.