WHO Yemen
The World Health Organization (WHO) has been delivering water to internally displaced persons (IDPs) in Al-Dhalea governorate, Yemen, are suffering from a shortage.
8 June 2015

The World Health Organization (WHO) stressed that more than 15 million Yemenis do not have access to basic healthcare, with 53 health facilities closed and malnutrition increasing, the UN Spokesperson Stéphane Dujarric told reporters at the world body’s daily briefing in New York.

Last week saw attacks on dozens of health facilities by fighting, shelling, and airstrikes in Yemen since the escalation of the conflict in March. In addition, 10 health care workers have been killed or injured while carrying out their duties since that time. WHO continues to appeal for the protection of health facilities, staff and patients.

And on the education front, UNICEF says that 87 per cent of schools in the southern five governorates are closed.

“Our humanitarian colleagues also say that there are more than 250,000 metric tonnes of grain in stores in Aden and Hudaydah, but that it can’t be transported due to lack of fuel and insecurity, nor be cooked because of a lack of cooking gas,” said Mr. Dujarric.

Without the full resumption of commercial imports and a safe environment in which to transport these goods, humanitarian agencies cannot meet the ever-growing needs of people to whom access is increasingly constrained, he warned.

Consultations aimed at bringing together a broad range of actors including the Yemeni Government and other stakeholders in an effort to stem the ongoing violence afflicting the country are set to start in Geneva on 14 June.

On Saturday, Secretary-General Ban Ki-moon welcomed the readiness of President Abd Rabou Mansour Hadi of Yemen to send a delegation to participate in UN-facilitated Yemeni-Yemeni consultations. The UN chief had earlier called for a postponement in the consultations, which were originally set for 28 May, and has repeatedly urged all parties in Yemen to return to the negotiating table. 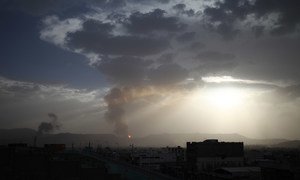 Secretary-General Ban Ki-moon today welcomed the readiness of President Abd Rabou Mansour Hadi of Yemen to send a delegation to participate in United Nations-facilitated Yemeni-Yemeni consultations in Geneva, set to start on 14 June.