Experience in the past two decades, particularly the 15 years of the Millennium Development Goals (MDGs), has shown the potential of a “true global pact for development,” the United Nations Deputy Secretary-General Jan Eliasson said today during a commemoration of the 20th anniversary of the UN World Summit for Social Development.

“The year 2015 presents an historic test and challenge for the international community and national institutions. We are embarking on a voyage of transformative change affecting all sectors of our societies. This change must be built on universality, sustainability and acceptance of interdependence as a win-win proposition for both nations and people,” said Mr. Eliasson in opening remarks to the special meeting convened by the UN Economic and Social Council (ECOSOC).

Held in March 1995 in Copenhagen, the World Summit for Social Development was the largest gathering ever of world leaders at that time. By putting people centre stage, the Summit pledged to make the conquest of poverty, the goal of full employment and the fostering of social integration overriding objectives of development.

The commemorative meeting also heard opening remarks from ECOSOC Vice-President Oh Joon, who said that without doubt, the Social Summit was one of the major building blocks in establishing the Millennium Development Goals (MDGs), and the integrated approach advocated at the Summit contributed to the common understanding on the economic, social and environmental dimensions of sustainable development and the need for a balanced integration of these three dimensions.

Mr. Eliasson stressed that today’s event provides an opportunity for reflection on progress […] as well as on remaining challenges and the road ahead,” especially in promoting social progress, social inclusion and social justice. “Peoples’ needs, rights and aspirations are the glue that should bind together […] efforts at local, national, regional and international levels.”

Advances have been made in health and education, assured Mr. Eliasson, who also noted that a smaller proportion of the world’s population now lives in extreme poverty than 15 years ago.

“Yet, more than a billion people still live in extreme poverty”, he explained. “Inequality tends to be systemic and is in many cases widening to an alarming degree. Economic opportunities for women and girls are lacking in far too many places. Environmental degradation and climate change threaten the basis of healthy lives and even our survival. We certainly do not live in peace and harmony with Nature. We are endangering the lives of future generations.”

Unemployment remains high, observed the Deputy Secretary-General. Globally, he said, as many as 73 million young people are looking for jobs people, three times more likely than adults to be unemployed.

“When young people sense frustration and anger at a glaring lack of opportunity, they are more likely to lose faith in government and in institutions. In many parts of the world, this leaves young people receptive and vulnerable to marginalisation and radicalisation.”

That is why a set of new sustainable development goals, “universal, people-centred and cross-cutting in nature,” are needed, continued Mr. Eliasson.

After the Third World Conference on Disaster Risk Reduction, which was held in Sendai, Japan, last March, three major international decision-making processes are ahead before the end of the year: the Third International Financing for Development Conference in July, in Addis Ababa; a UN summit to adopt the post-2015 development agenda in September in New York; and the UN climate change conference in December, in Paris.

“As was the case with the development conferences of the 1990s, the outcomes of these key meetings will affect global political, economic, social and environmental priorities and policies for many, many years to come. These processes must complement and support each other.

“Let us use the lessons of the past to ensure a better future for all. No one must be left behind on our common voyage.”

Echoing that call, ECOSOC Vice-President Mr. Oh said that over the past 20 years, the international community had learned that economic and social development and the well-being of all people and the planet are all inter-related and mutually reinforcing.

“ECOSOC is mandated to identify emerging challenges and promoting reflection, debate and innovative thinking, as well as achieving a balanced integration of the three dimensions of sustainable development,” he said, reaffirming on behalf of the UN body’s Bureau, the Council’s commitment in carrying out its work in the post-2015 era, keeping the lessons of the pioneers in the Social Summit in mind. 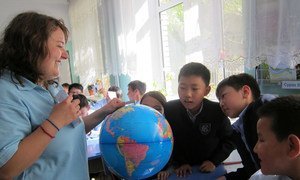