José Graziano da Silva, two days after his re-election as the head of the United Nations Food and Agriculture Organization (FAO) for another four years, today announced that eradicating hunger, raising levels of nutrition and addressing climate change are among the agency’s top priorities during his second term.

On Saturday, the first day of FAO’s biennial governing Conference, which is running through 13 June in Rome, where the agency is headquartered, Mr. Graziano da Silva received a total 177 of 182 votes cast by FAO member countries, representing the highest number of favourable votes ever garnered by a candidate for the Organization’s top post.

Yesterday, an awards ceremony recognized the great effort made by countries around the world which has led to the near achievement of the UN Millennium Development Goal (MDG) target to halve the proportion of hungry people by a 2015 deadline, or bringing it below the five per cent threshold.

“A majority – 72 out of 129 – of the countries monitored by FAO have achieved the MDG target, with developing regions as a whole missing it by a small margin,” FAO said in a press release. “Out of the total 72 countries, 29 have also met the more stringent goal to halve the number of hungry people as laid out by governments when they met in Rome at the World Food Summit in 1996.”

Today, Mr. Graziano da Silva told delegations at the governing conference that FAO, which this year celebrates the 70th anniversary of its founding, has, together with its member countries, made a “great contribution to increasing food production” in the world.

He underscored that now the next step must be the complete eradication of chronic undernourishment.

“This, together with ending malnutrition has been included in the sustainable development goals which will be finalized later this year setting the global development agenda for the decades to come,” he said.

The FAO chief noted that while global undernourishment numbers are falling, obesity is going up. “It is a problem in developed and developing nations, for poor families and rich families, especially in middle-income countries.”

Global warming, he said, is having an impact on food security and agriculture on all countries, especially drylands and small island developing States (SIDS), where many of the world's poor and hungry live, Mr. Graziano da Silva said.

He referred to some of FAO's work in this area, including through the Blue Growth Initiative, which proposes to integrate fisheries and sustainable environmental management in coastal areas and oceans.

“With the right policies, we can increase food security, adapt to and mitigate climate, but this will require a paradigm shift from the dominant input intensive approach to more sustainable and resilient food systems,” he added.

In his speech, the Director-General noted that during his first term in office, FAO had emerged leaner and with a sharper focus, including in its work around five strategic objectives. Mr. Graziano da Silva has worked on issues of food security, rural development and agriculture for over 30 years. 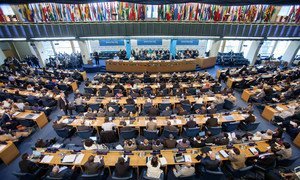 Incumbent Director-General of the United Nations Food and Agriculture Organization (FAO) José Graziano da Silva was today re-elected to a second term in the agency's top post with the highest number of votes ever in the history of the FAO.