Almost 1,000 civilians killed in Afghanistan conflict during the first 4 months of this year

The conflict in Afghanistan is resulting in thousands of people being killed or wounded, forcing families to leave their homes and seek refuge in neighbouring communities, according to Mark Bowden, the UN Secretary-General’s Deputy Special Representative in the country.

“As of 30 April, 1,989 Afghans were injured as a result of the conflict and 978 Afghan civilians killed, throughout the country,” Mr. Bowden said on Sunday, noting that the number of wounded at the Emergency Hospital in Kabul illustrates the devastating impact of the conflict.

“The doctors there told me that they are seeing a 50 per cent increase in the number of civilians injured this year compared to the same period last year,” he noted.

Speaking at the Second Independent Media and Civil Society Forum in Kabul, the UN envoy, who is also the deputy head of the UN Assistance Mission in Afghanistan (UNAMA), said the intensifying conflict in 2015 is taxing humanitarian capacities.

“At this period of increased need, it is particularly disturbing to note that humanitarian aid workers are increasingly becoming targets themselves,” he said, while calling attention to the crucial role civil society plays in holding non-state actors accountable for their actions.

“It is through its engagement with the media that civil society can advocate more strongly about the conflict and the resulting humanitarian situation,” he stressed. “The relationship between civil society, media and humanitarian action is strong.”

UNAMA is mandated to support the Afghan Government and relevant international and local non-governmental organizations to assist in the full implementation of the fundamental freedoms and human rights provisions of the Afghan Constitution and international treaties to which Afghanistan is a State party, in particular those regarding the full enjoyment by women of their human rights. 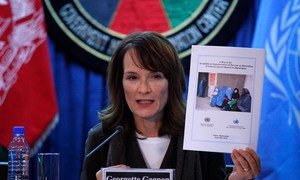 While the outgoing senior United Nations rights official in Afghanistan said she expected the human rights advances made “will be sustained, will not be rolled back, and will not be sacrificed,” she lamented the high level of violence against women and the need for the Government to do “much more” for women’s rights.